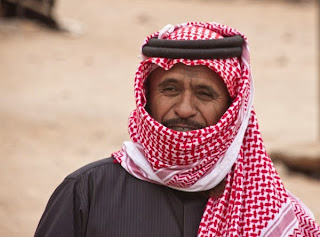 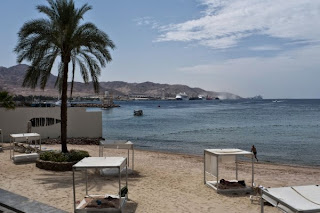 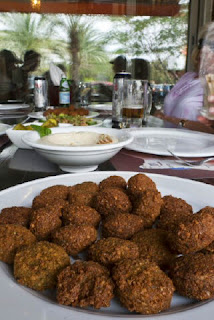 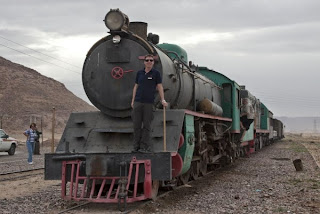 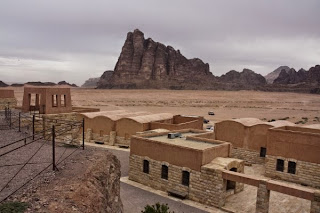 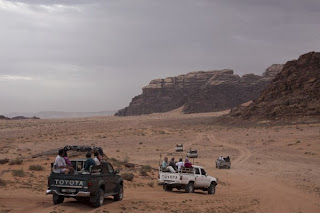 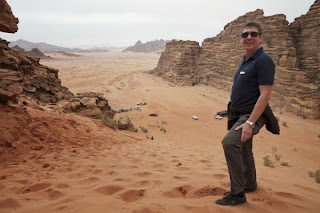 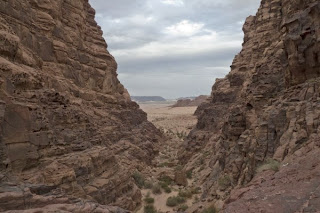 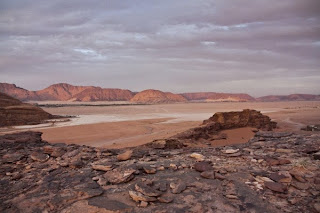 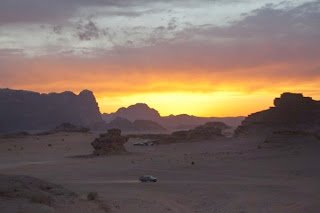 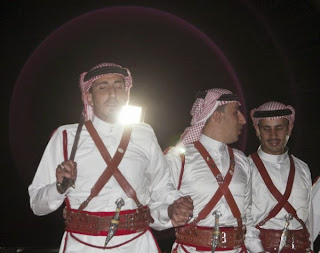 In Aqaba, most people quite rightly head off to the amazing hidden city of Petra out in the desert, however there's a lot more to see here in southern Jordan than just Petra. We were joining the ship's afternoon tour to Wadi Rum, which gave us enough time in the morning to sample a little of Aqaba's growing tourist industry, as the town tries to market itself as a red sea resort along the lines of Egypt's Sharm El-Sheikh.

What we saw of the local tourist trade was a little classier than Sharm El-Sheikh (even allowing for "The Rover's Return" British pub), and we headed to the luxurious Kempinski Hotel for a drink and some wifi. It made for a very relaxing place to chill out, as we looked over the beach, across the Gulf of Aqaba to the nearby (much more built up) Israeli resort of Eilat.

However, the lunch time menu was more nachos than falafel, guacamole not hummus, so we decided to head back into the centre of Aqaba for something a bit more genuinely local. We got all this and more at the (unpromising sounding, but lovely) Ali Baba restaurant, which served up a delicious feast of Arab specialities.

At the end of this, we were ready to sleep, but we were now heading off into the fabled Wadi Rum desert – a place of haunting wide-open landscapes where Lawrence of Arabia fell in love with Arab culture. The further we got into the desert, the more spectacular the landscapes got – flat plains of red and golden sands, interspersed with mountains and hills, weathered into strange shapes by the millennia. At the start, the sky was cloudy, which meant that there was a danger that the colours wouldn't be so spectacular, or the stars so bright once the sun went down; however, thankfully, the skies slowly cleared as the evening approached.

We climbed into open 4x4s, and bounced along these unbelievable landscapes that just made you feel small and insignificant, stopping to climb up a huge (literally breathtaking) dune, or at viewpoints down spectacular jagged gorges. Then, just as sunset approached, the clouds lifted and the sky turned red, as the vast sands turned all sorts of shades. As people who know me will attest, I'm not a very spiritual person, but there was a spiritual element there, as you drank in these magical views.

As the sun disappeared, we went to a re-created Bedouin camp in the desert to have some dinner. It was all pretty slick, but the food was delicious, the setting pretty stirring, and the singing and dancing by the sword-wielding Bedouins was good fun to watch. Every now and again we'd remember to get away from the light of the camp, and look up at the night sky – once you blocked out the light, a blanket of twinkling stars would appear magically out of the darkness.

A wonderful day to enjoy the awesome natural sights of Jordan, and to enjoy its friendly people.