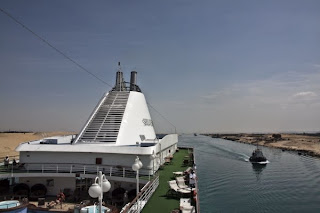 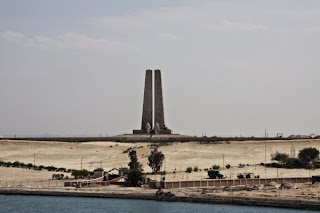 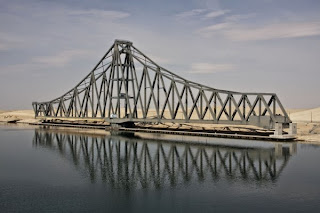 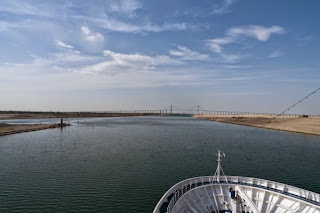 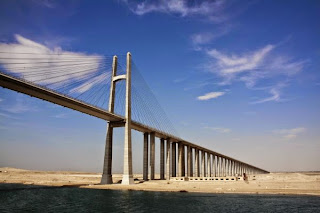 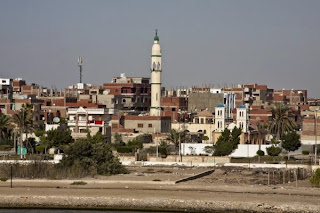 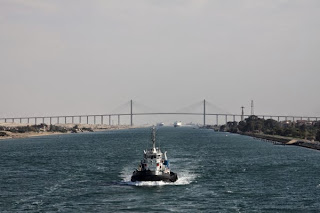 The Suez Canal transit is always an interesting one – passing through what's the most strategically important waterway in the world, crossing paths with some of the most enormous ships you can imagine. Ships well over 150,000 tons, stacked high with containers, that pay up to $1million to avoid the 6,000 mile journey round Africa.

As we passed up the canal, passing fertile agricultural land on the African side, and barren desert on the Asian, Sinai side, I did a commentary from the bridge, pointing out the towns and the war memorials that remind us that the canal has frequently been a battleground in its short history since its construction in 1869.

The aspect that told us most about Egypt's current chaotic state, is that the railway bridge and the enormous road bridge that had been built at huge expense to connect the two continents, were both shut because of the ongoing unrest in the Sinai. The huge military presence we saw on both sides of the canal was reassuring for our safety, but a little worrying for Egypt as a country that it needs that level of protection.

By 6pm we had finished the transit and we were now in the Mediterranean, which meant no more pirate watch for the ship's security people, but a significant drop in temperature – I'm not sure that summer has started in Europe yet.