Halong Bay is a place that's changing fast. Of course, its beautiful, ethereal landscapes of weathered limestone rocks sticking straight out of the sea, still have that mysterious timeless quality, but it's what's going on around them that's affecting the formerly peaceful atmosphere of the Bay.

Tourism has already well and truly discovered the Bay, but the big plan seems to be to ramp this up to the max. With about 500 tourist boats a day heading into the Bay, you'd say that it's already reached saturation point – the tranquil atmosphere is often broken up by so many boats jostling for permission, while pollution is rapidly affecting the quality of the Bay's famous limpid green waters.

Most alarming was our guide telling us that there is a $2 billion development plan to triple the number of visitors to Halong Bay – I don't know if I believe the numbers, but he said the plan was that 16 million visitors a year would visit the Bay. Certainly, what's happening on the land is quite remarkable – where once were fields, there's now lines of massive hotels and apartments blocks, while a new multi-milllion dollar amusement park and cable car are being constructed. Whether you think scream-inducing rollercoaster rides and a Vietnamese version of Disneyland fit in with the serene landscapes offshore is down to your point of view.

But, for the time being, Halong Bay still retains those magical qualities that have attracted all this investment. And, today I was having a more hands-on encounter with the Bay than usual – rather than quaffing champagne on a boat trip like the majority of the passengers, I was getting a bit closer onto the waters, by going on a kayaking trip.

Given that it was quite cold today, a spot of kayaking at least proved to be a good way of keeping warm, and it turned out to be a really fun way to explore this beautiful Bay of islands. As the tide was quite low, we were able to paddle into sea caves and inside a couple of the circular islands surrounded by sheer walls of rock. Away from the tourist boats, with just the splash of our oars to break the silence, it felt like we were in the Land That Time Forgot.

Every now and again, just to remind us of the modern world outside, we'd paddle past a floating plastic bag, a bottle, or something a bit more suspect than that; while, often there was an oily film on the water that made me more determined than ever not to capsize. But, being this low on the water really allowed you to appreciate the magnificence of these strange-looking islands.

Mother Nature has created something unique here. I can only hope that man doesn't ruin it. 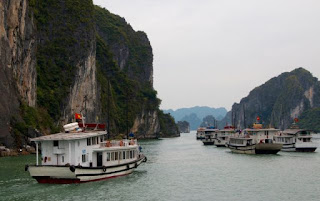 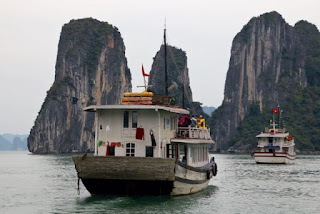 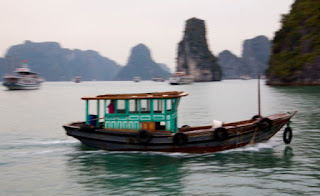 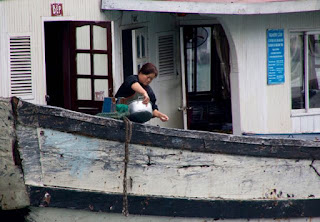 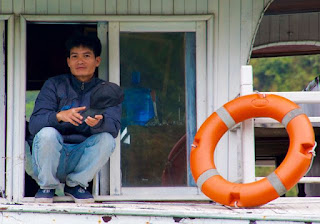 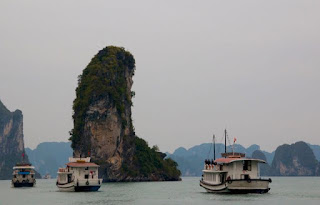