It was a struggle to get out of bed this morning after our exhausting trip to Bagan, but it would have felt like a wasted day if we hadn't seen at least a little of Rangoon/Yangon. In a country where the economy is expanding rapidly (admittedly from a very low point), and where the political landscape is changing by the day, we wanted to see what affect this had had on Rangoon, the country's largest city.

The biggest affect seems to be that the traffic here has got even worse in the last couple of years (I would scarcely have thought it possible after our last traffic-filled visit in 2014). There are obviously more cars on the road as the economy improves, but there seems to have been zero investment in infrastructure, which means that the city is fast (or slowly) approaching constant gridlock, so that a shuttle bus ride that should have taken an hour, in fact took 2 frustrating hours.

Fortunately, the views from the coach window are pretty good – life is lived out on the street here in Burma, so there's always something going on by the side of the road.

All we really wanted to achieve today was to visit the Shwedigon Pagoda, the country's holiest (and most extravagant temple) – which was just as well, because after that journey, there wasn't much time left for anything else. I've visited it a couple of times, but only at night, so I wanted to see it in daytime.

We quickly discovered that visiting at mid-day is not the ideal time to visit, unless you have asbestos feet. The temple itself looks great, glowing in the bright sunshine, but the floor around it has been superheated by the sun, and it feels as if you're walking on hot coals, as you tip-toe around in your bare feet. The white marble tiles get hot enough (you can just about touch them for a second before your feet start to burn), but the ceramic tiles that intersperse the marble are like frying pans that have been on the hob for the last hour.

As you might expect, it didn't make for the most relaxed temple viewing, as we hopped about, sprinting from shade to shade. Even the locals, who must have much tougher feet than us, were running around the temple rather than walking serenely as they do in the evening. I resorted to pouring water over the soles of my feet, and I could swear that I saw them steaming!

In the few moments where it didn't feel like our feet were going to blister up and disintegrate, the sheer golden magnificence of the Shwedigon just took your breath away – it's an amazing concoction of gold, diamonds and precious stones, and all around it are so many Buddha images (in every possible state of repose imaginable), that it all felt like there were more Buddhas than worshippers.

At the end of it all, I have never been more relieved to put my shoes on, and we just about had time for a bit of exploring of the chaotic streets of central Rangoon. The poor state of the pavements and the pervasive rubbish on the streets were another sign of the lack of investment in the infrastructure here, but the number of building sites and amount of bustling commerce we saw, were surely a sign of a city on the up. The incomparable Shwedigon will always be a breathtaking sight – I wonder what the rest of the city around it will look like in a couple of years time? 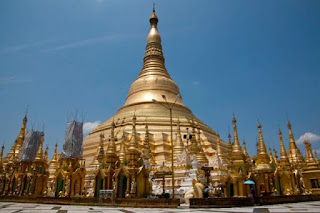 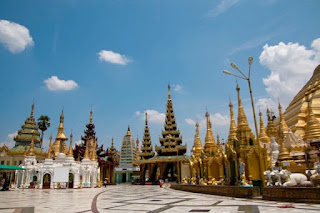 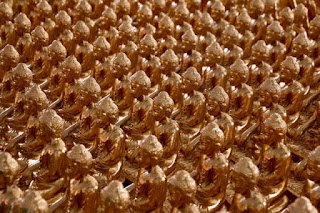 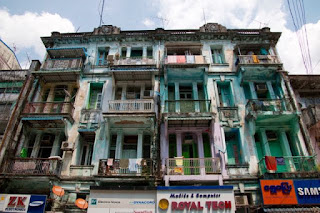 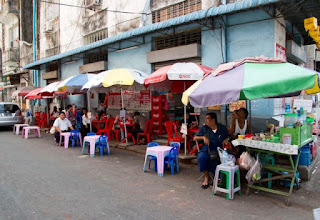 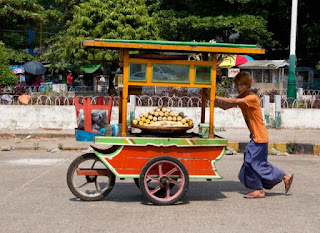 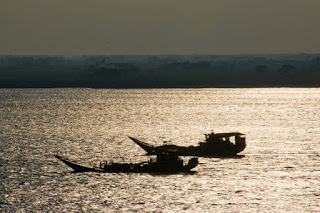