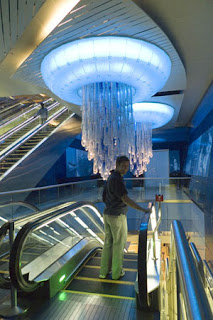 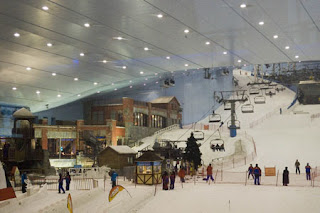 Dubai is famous for its shopping and its over-the-top attractions, so today we combined the two at the huge Mall of the Emirates and the ridiculous SkiDubai.

To get there we caught the super-efficient, spanking new Dubai Metro - it proudly boasts that it's "the world's largest automated metro system built all in one go" (even though it's not finished). It's largely overground, so you get to see the the cartoon city sprawl in front of you as you zoom past all the traffic jams. As you travel, you're hit by how incredibly multi-cultural Dubai is - you share the train with locals in their full Arab regalia, Indians, Pakistanis, Filipinos, Westerners and countless other nationalities (what unites them all is that they're all on their mobile phones constantly).

The Mall of the Emirates used to be the largest Mall outside of North America, but now it's only medium sized by Dubai standards - "only" 400 shops. Because of exchange rates, we've found the shopping to be quite pricey, so we managed to resist the worst of the retail therapy.

So, we ended up at the ludicrous SkiDubai (the world's largest indoor ski slope). The logic of building a ski resort in the desert is hard to fathom, but logic isn't something to enter Dubai's equation. So people ignore the 30C temperature outside to put on their gloves, hats and ski gear to enjoy a global warmingly good time. I think we'll save our skiing for real snow in real ski weather.