December 19th – Finishing The Cruise on a High in Dubai 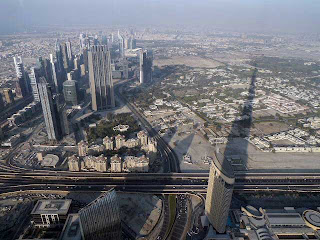 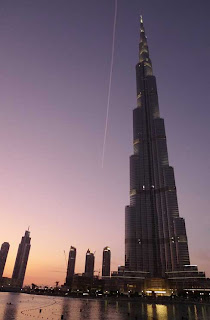 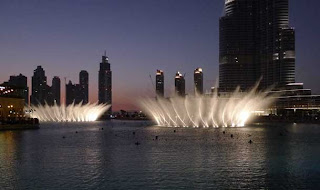 After 2 days sailing across the Indian Ocean and a day of relaxing in Muscat, we have reached our final destination and the end of the cruise – Dubai.

Unfortunately, our sail into the port wasn't as relaxing as we'd hoped, because overnight we'd got an email from British Airways to say that our flight home tomorrow was cancelled because of the snow chaos that's shut Britain down. So, after finding that their website was no use whatsoever, and trying to get through on the phone for an hour and a half, I finally got to speak to someone. The only alternative that they could offer us was a flight via Amman on Royal Jordanian, on the day after, so we would be spending at least one day extra in Dubai. As there is no way of guaranteeing that Heathrow airport would be open, it looks like we might be spending Christmas in Jordan!

Ignoring all these uncertainties, we carried on with our Dubai exploration as planned. We'd booked some tickets to go up the world's highest building, the phenomenally tall Buj Khalifa – at 160 storeys, it's half a mile high, and twice the height of the Empire State Building.

So, we virtually flew up to the world's highest observatory ("only" on the 124th floor) in the world's fastest elevator, and marvelled at the amazing views below us – it was literally like looking out of an aeroplane window. As you look down at the toytown city below you, you get an impression that Dubai is just a temporary city – everything is brand new or half-finished, and built on sand, with the desert stretching out for miles behind the sprawling skyline that hugs the coastline. Again, you can't help but be impressed at the scale and ambition of the city, even if you know that half of the office space in this building and in a lot of the newer buildings is unoccupied.

Then, we changed our perspective, and went to the bottom of this intimidating "superscraper" to gaze up at its hypodermic-needle-like profile as the sun set, and the dancing fountains display began. To a background of Arabic music and shoots of flames, the enormous jets of water swayed gracefully, splurted powerfully and took on beautiful organic shapes and movements.

Again, while you might question the taste of having these enormous fountains in a place of less than 100mm of rainfall a year, it made for a thrilling and ingenious spectacle.