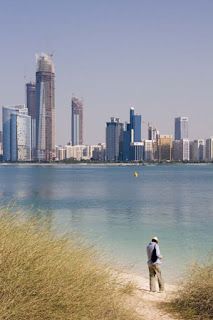 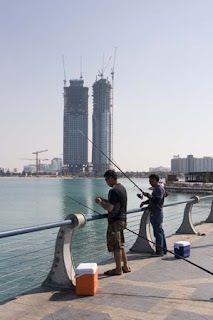 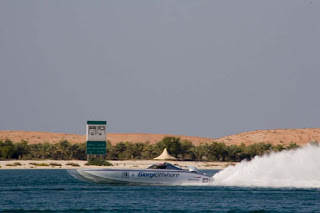 Today we did something that most people don't do in Abu Dhabi – we walked. In an incredibly rich state that sits on 10% of the world's oil reserves, pretty much everything is set up for the car rather than the pedestrian, but we thought we'd give it a go.

So, we hopped on the first bus that was passing (without knowing where it was going to), and walked back to the port from there. The bus took us to the huge Marina Mall which was quite quiet because it was a Friday, and then we walked to the Heritage Village – a modern attempt to recreate Abu Dhabi's desert past (not easy when across the water was one of the most modern skylines in the world, with lines of towering skyscrapers).

From there, we walked along the length of Abu Dhabi's scrupulously clean corniche, with all the skyscrapers on one side and the white sandy beach on the other. At times you needed to remind yourself that you were in Arabia, in a deeply Islamic country, as you passed all the western tourists lying out there on the beach going for the burn. Other than tourists, pretty much the only other people we saw there were the people from India, Pakistan and the Philippines who had been imported in to work here – scarcely a local in sight.

The peaceful holiday atmosphere was only broken by the screaming engines of the Powerboats who were racing around the harbour for the Powerboat Formula One – another reminder that Abu Dhabi is trying to copy Dubai and make itself an international tourist attraction.
Like Dubai, Abu Dhabi's not necessarily a charming city but you have to admire the way that it's transformed itself in the last decade.