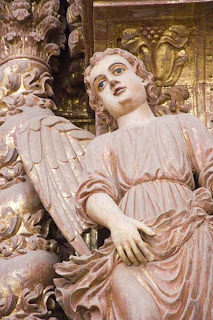 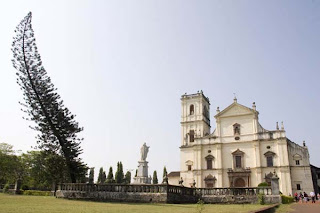 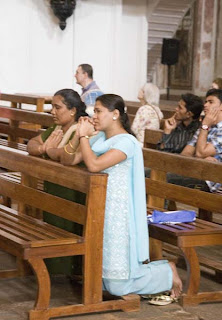 We had just over three hours to explore Goa's remarkable legacy of Portuguese relics – the result of 450 years of Portuguese rule here, and the domination of the Catholic Church in Goa.

From the port at Murmagao, we drove for about an hour to Old Goa, the former capital of Portugal's imperial possessions in the East, and once one of the largest and richest cities in the world. As a result, there's an amazing array of huge whitewashed churches to see here, but what makes it even more interesting is that this boom-town of a city was totally abandoned in the 18th century (because the river silted up, so no ships could land here and then the city was hit by plagues and diseases).

So, the city of Old Goa was taken over by the jungle, as most of its buildings either fell down, or were demolished for their building materials, leaving just a few ghostly relics of a once-great city. It's remarkable to walk around the cavernous churches that are left, and see no sign of the houses of the people who would have worshipped at the churches.

As time was very short, we had a fast-paced trail around three of the grandest churches, the Church of St Cajetan (modeled on St Peter's in Rome), the Se (this enormous Cathedral was once the largest church in Asia), and the baroque Church of Bom Jesus (the home of the powerful Jesuit order). Perhaps the most interesting was the Church of Bom Jesus, because it houses the tomb of the great missionary priest, St Francis Xavier – a man whose work is still going strong here in Goa, where about a third of the population are Catholic.

At the end of this whirlwind tour, you were left with the feeling that you wanted 3 weeks in Goa, ot three hours, but at least it was a good taster for a wonderful and incredibly culturally rich art of the world.