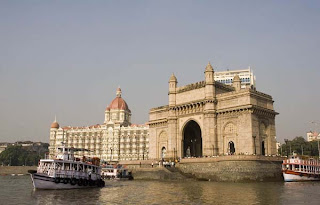 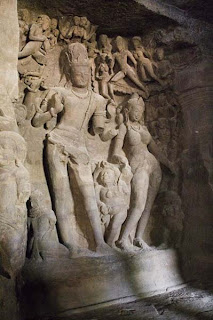 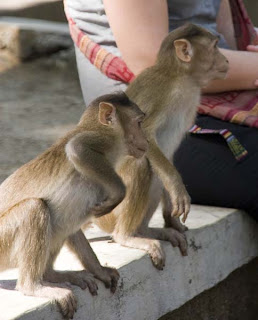 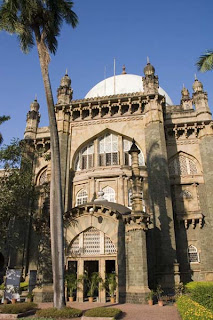 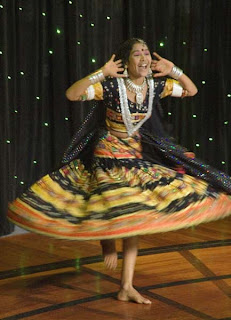 Getting out of Mumbai's port is always a trial, as you run the gauntlet of Mumbai's voracious taxi drivers, and try to negotiate a reasonable price to get into the city – they start at $40, when you know that if you can manage to get them to put it on the meter, it should be no more than $2.

So, we finally got someone to agree to take us to the Gateway of India, for us to catch the ferry to Elephanta Island, a peaceful island retreat about 6 miles away (an hour on the ferry) from the chaos of Mumbai's breathless streets. The Island is home to a wonderful Hindu temple carved into the caves, decorated with some of the best rock carvings in India. As you climb the many steps up to the caves, you again have a gauntlet to run, this time from the pushy souvenir
salesmen, but more alarmingly from the monkeys who run around the island like they own it. Tracy has a well documented monkey phobia, which wasn't helped by the fact that the first monkey we saw was sitting on the railing, looking directly at us while he nonchalantly pleasured himself – welcome to Elephanta Island!

Ignoring this lewd welcome, we explored the caves and marveled at the excellent quality of the statues of Shiva and fellow deities, which were around 1,500 years old. Then, we braved the monkeys on the way down, and found that the ferry that we were heading for had already gone (early…… in India…. really?!?), and so had to wait around for the next one. Trying to get information on timings was another reminder that it's virtually impossible to get a straight answer from anyone in Mumbai – either they don't really understand you and just tell you what they think you want to hear, or they just brazenly lie to you to get you to spend more money than you have to.

Having successfully made it back to the mainland, it was time for food – being away from the UK for a month meant that we were by now desperate for a curry, so we found a backstreet place to have a good feed. So, we stuffed ourselves with a delicious thali in a friendly place full of local workers where no-one spoke English. The bill came in at a massive $4, and it was way more than we could eat.

Scarcely able to move, we waddled over for a bit of culture at the Prince of Wales Museum – Mumbai's best museum, housed in a wonderfully grand Victorian building, topped with extravagant onion domes and Moorish features, and full of ancient artifacts and paintings. In a good example of Indian bureaucracy and overstaffing, our tickets were checked 4 times by different people on our way into the Museum, and our bags were checked 3 times.

Unfortunately, wandering around a non-air conditioned museum with a full stomach does not make for a body or mind totally receptive to culture, and so we maybe our lethargy didn't allow us to do the museum justice, but it was interesting nonetheless.

Undaunted by our lack of energy, we went across the road (never an easy undertaking in traffic-clogged Mumbai) to the Modern Art Museum, for a quick perusal of the post-colonial art scene in India – as you'd expect, the art was very colourful and full of energy. By now, we were in dire need of a shower, so we caught a taxi back to the port (the fifth one we hailed was finally able to
understand us – he even spoke enough English to try to rip us off).

Refreshed and rehydrated, we saw a show by a great show by a local dancing troupe who came onboard – so much energy and vitality – and then headed off to dinner in a restaurant that had been recommended to us, Khyber. This is an upscale restaurant, so none of the bargain basement prices you get in the grungier restaurants, but the quality of the food was excellent, although our lunchtime over-indulgence meant I didn't eat as much as I'd have liked – probably a good thing given my ever expanding waistline.