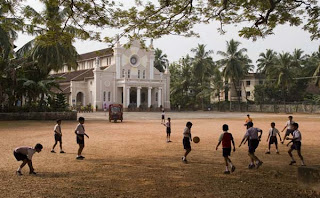 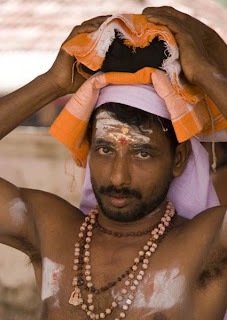 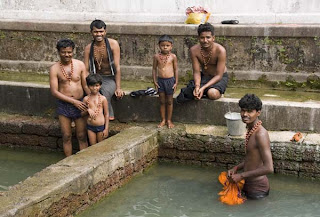 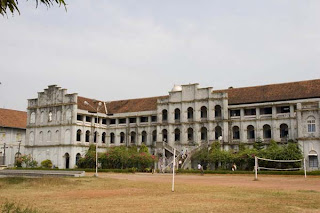 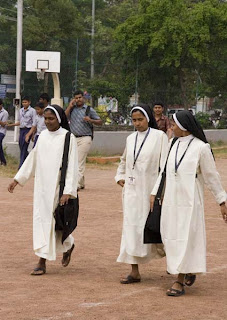 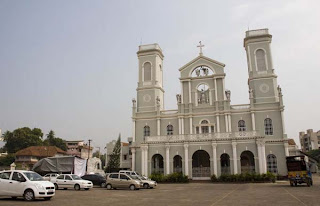 Mangalore in Karnataka province is not really on the tourist trail, so for us it was a place to try to delve into India's temple scene in a bit more depth, and to experience an environment where they're not fed up (or paranoid) of tourists taking photos.

Our first task was to negotiate with a taxi driver to get us from the unattractive port area at New Mangalore and into town. Once a price was agreed, as ever, you're left with the feeling that you were being totally overcharged; but I suppose you just have to make yourself feel better by thinking that a taxi in the West driving you around for 6 and a half hours would cost a whole lot more than $20.

So, we bounced into town along Mangalore's terrible pot-holed roads, and visited a few relics of European life – this is another place where Catholicism is fairly deeply ingrained from the century of Portuguese rule, 400 years ago, so there was an impressive array of colourful Catholic churches, Cathedrals and schools to explore.

But the best thing that we liked about Mangalore was the access to its atmospheric Hindu temples, without having to pass through oppressive security, and where the worshippers weren't at all camera shy – in fact they positively encouraged us to photograph them. It was fascinating to see the complex rituals going on at the huge Kadri Manjunatha Temple, where the worshippers chanted and rocked devoutly as they huddled together in little groups, and then threw cocoanuts at a rock and smashed them into smithereens with great aplomb. We then went up to the bathing pools above the temple, where groups of men and their boys washed themselves down before prayers – the little boys splashing around in the water were adorable. All-in-all, it was a very spiritual but welcoming atmosphere to experience – lovely to be in a relaxed and informal place of worship without a hint of fanaticism.

After visiting another impressive chapel attached to a Catholic high school, our taxi driver insisted that we went to modern Mangalore's pride and joy – a big multi-storey shopping mall. It was hardly anything to rival Dubai's malls, but the prices were much more reasonable, and the stuff on offer was more original and authentic.

Our verdict on cruising to Mangalore? Although quite a few people were put off by the ugly industrial docks, and also the fact that it was a place of few set pieces; we found it an interesting place to explore. an ordinary provincial town that was India in a microcosm – chaotic streets, predatory taxi drivers, a colourful cosmopolitan environment, atmospheric temples, friendly people, great food, increasingly modern and western yet without losing its exotic soul.

For once, the tourist board isn't exaggerating – "Incredible India" just about sums it up. We can't wait to come back to this incredible country.