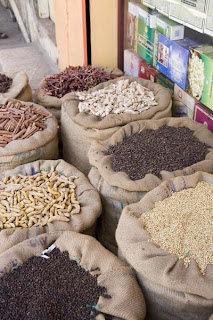 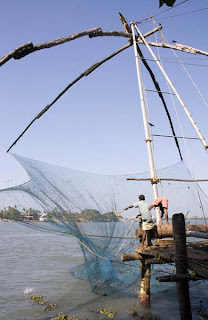 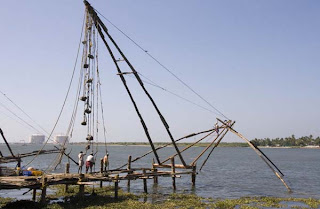 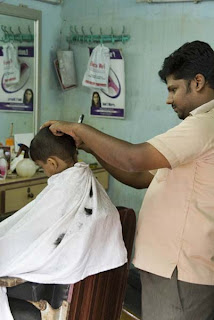 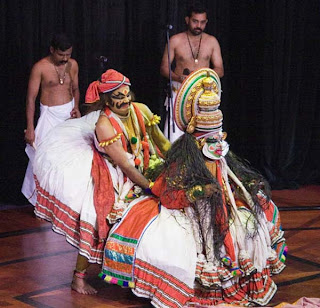 Cochin in beautiful Kerala, is the most culturally rich part of India – within the space of an hour you can see so many influences from the East and the West. As well as Hindu temples, you can visit whitewashed Catholic Churches (from Portuguese times), gabled 18th century Dutch houses, an English Village Green (complete with cricket matches fought out by the locals), Jewish synagogues, Muslim mosques, and of course, the famous Chinese Fishing Nets that feature in any tourist brochure of Cochin.

We caught the ferry from Willingdon Island where we were docked to Fort Kochi, to explore its laid back historic streets. We passed the constant activity of the Chinese Fishing Nets, looking like giant alien spiders being lowered into the water, as a great team of men beaver away and pull the nets up to reveal a tiny catch of little silvery fish.
We visited St Francis Church, built back in 1502 by the Portuguese and adapted by the Dutch and then the English who followed them. The reason all these foreign powers were interested in this part of the world was because of the spices that came from here, so we perused the many fragrant spice stalls, mouths watering at the delicious curry smells – we will be cooking some classic curries when we get back.

We then headed over to Jew Town, the atmospheric part of Cochin which once had a thriving Jewish community, that has lived here for around 2,000 years – these days, after mass emigrations to Israel, only about 10 Jewish people still live here (most of them fairly old).

At the end of the day, we headed back to the ship for a colourful Kathakali performance – a dance form unique to Kerala that's hard to fully appreciate for Westerners, but obviously means a lot to the locals. The performers are made up with vivid colours (even the whites of their eyes and their tongues are dyed pink), and they perform a tragic-com of a soap opera full of illicit sexual advances and murder, to a background tune of wailing, drumming and singing. To me, it was all quite fun, but to many of the audience it was fairly impenetrable and slow moving – I guess that if you forced a bunch of Indians to sit through "The Bold and the Beautiful", or "The Marriage of Figaro", they might struggle to appreciate them too.