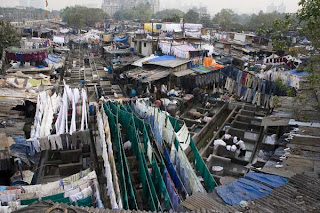 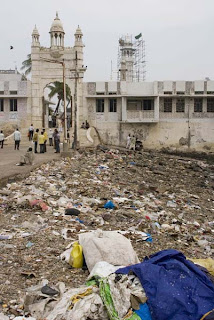 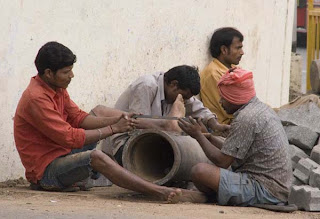 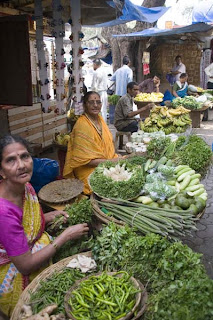 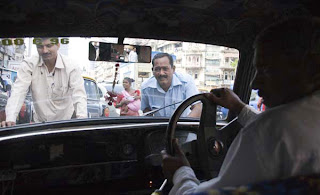 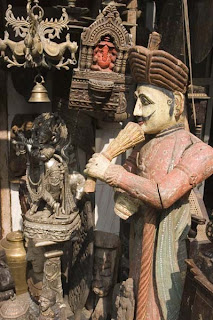 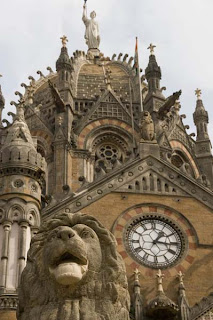 On the way back to the port last night, a taxi driver got us to agree to let him drive us around for the day – he said his name was John, and he guaranteed his honesty. His car was just about held together by gaffer tape, you could see the road through the floor, the engine had all the power and the roar of a lawn mower, and it was very cramped in the back – but we entrusted our lives to him. He somehow managed to be totally laid back, whilst driving in the most incredibly aggressive manner. He cut people up with abandon, routinely ignored red lights, drove on the rong side of the road whenever he fancied it, and left a trail of disgruntled drivers hooting uriously in his wake. At first the constant feeling of being near death was alarming, but after a while it just felt normal, and we enjoyed the constant theatre going on outside, along Mumbai's incredibly busy streets.

We were heading for the Haji Ali Mosque, but on our way we stopped for a brief photo stop at the frenzied cleaning activity going on at the Dhobi Ghats, Mumbai's largest public laundry. In a city of 20 million people, then the laundry system is going to be on a large scale, but this is still a spectacular sight, as the Dhobi Wallahs thrash the clothes and hang them in colour coded groups on huge washing lines.

We then made it to the Haji Ali Mosque, Mumbai's most holy Muslim shrine. It sits out in the sea on the end of a causeway, which floods when the tide is in, and which makes its way over the mud flats when the tide is out. The tide was well and truly out today, which meant a pungent sulphurous stench was emanating from the mud, as a few people waded around knee deep in the stinky flats, looking for anything of any value. The peeling white domed mosque looked like it had seen better days, but it was still fascinating to see the religious devotion of the worshippers.

Next we headed to the colourful Mahalaxmi Temple to see how Mumbai's Hindu majority worship. There seemed a more relaxed atmosphere here than at the mosque, although you had to pass through fairly heavy security to get in, and it was great to watch the ceremonies and devout prayer rituals.

By the time we finished, Honest John's car was beginning to give up the ghost and refused to start, so he press-ganged a couple of passers by to give him a push start. He wouldn't let us help, or even get out of the car, so we had the embarrassing scenario of us weighing down the car that these poor people were trying to push start. Anyway, we got going and made our way to the Chor Bazaar, Mumbai's so-called "Thieves Market", a place where supposedly, if you buy anything there, it was probably stolen from you in the first place. Here, in this busy market, you could pretty much buy anything – bric-a-brac, antiques, souvenirs, car parts, machinery, anything you wanted (or mostly didn't want).

By now, the heat, dust and crowds had finally worn us down, so we told Honest John it was time to take us back to the ship; so more people were forced to give us our push start and off we weaved through the traffic again. Honest John sensed that it was time to start the campaign for weadling more money out of us, although he ignored the usual sob story of describing his poverty stricken enormous family, and instead went for the "I've just got a big parking fine while I was waiting for you while you took some pictures". This was done with such an apologetic look on his face that he didn't even argue when we told him that we knew it wasn't true, so we settled on a price of £10 for 6 hours of driving – everyone was happy.

As ever, we had a great time in Mumbai, it's a place which has so much energy that it drains your energy reserves, but it always leaves us wanting more.