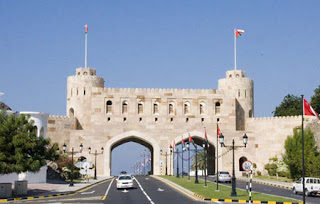 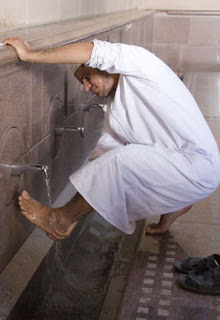 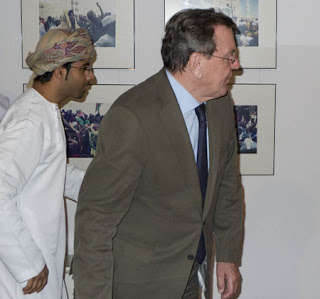 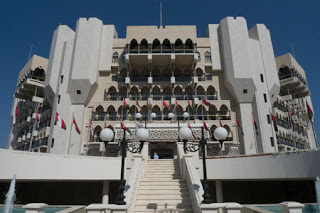 Today Muscat was welcoming rather more important visitors than just the passengers of the Silver Wind – to celebrate Sultan Qaboos' 40th anniversary of coming to power, various dignitaries from around the world had been invited, with the guest of honour being Queen Elizabeth II.

In reality, this meant that many of the roads were closed to allow the dignitaries' convoys to pass through, which meant delays and traffic jams for those wanting to go about the business of sightseeing. We avoided the worst of it, by heading to the outskirts of town to visit a couple of museums that brought to life the early history of Muscat and Oman. As we left one of the museums, an enormous cavalcade sped past, and a lady in a hat was spotted in the central limousine – whether this was the Queen or not, I don't know, but I'm claiming it as genuine Royal spot.

We were supposed to be having lunch at the palatial Al Bustan Hotel (one of the poshest hotels in the world), but unfortunately the Queen's visit meant that they cancelled our booking – seeing as it was the Queen, most of us took it in good spirit. So, we had a look around the sumptuous hotel anyway, before heading off to the Shangri-La instead (which was still pretty luxurious anyway).

At the next museum, I walked past a man who I recognised from the ship and said hello to him, and he said hello back. Then, I noticed that he had a film crew trailing behind him, and I realised I didn't know him from the ship, but from the news. It was Gerhard Schroeder, the former German Chancellor – I'm sure he was just as excited about seeing me, as I was to see him.