December 10th – A Tantalising Glimpse of the Falklands 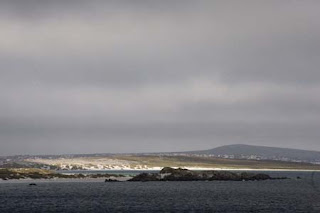 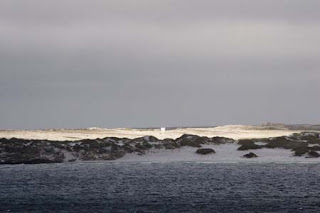 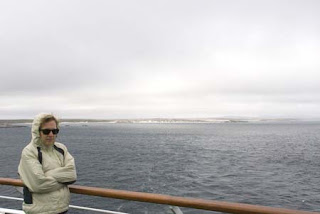 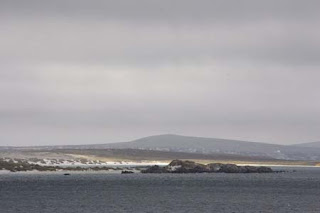 As we sailed down the notoriously unpredictable South Atlantic, it seemed like the weather gods were with us, because the seas weren't too rough – just 3 metre high waves (which is a lot less than we had sailing down to Puerto Madryn).

I've been obsessed by the Falklands since I first heard of them during the Falklands War in 1982, as a 12 year old schoolboy. I listened to every news bulletin, bought every magazine and book about the war; and I even decided I was going to join the Royal Navy – until lack of prowess at science and a lack of stomach for a fight meant that this wasn't going to be a viable career path.

Our plan for the day was perfect – we were going to hire bikes, cycle around Port Stanley and whizz over to Gypsy Cove to see the penguin colony there. So, I was a little over-excited about our visit this morning – waking up ridiculously early to check out the weather. It looked promising – cloudy and misty, but flat seas as we slowly made our way into the sound outside Port Stanley's harbour. However, the harbour is too small and treacherous (there's plenty of shipwrecks littering the harbour to remind you of the dangers) to let cruise ships in, so we'd have to get the ship's tenders in.

Literally, just as we were about to let down the anchor, some 40 mph winds swept in and buggered up my day. The prospect of us trying to get on a very bumpy tender was just too dangerous (never mind not being able to get back on the ship, and being stranded in Stanley), meant that the Captain had to cancel our call here. The sense of disappointment on the ship was palpable, but, as the winds picked up even more, you couldn't blame the Captain for his decision.

The only thing that has stopped me crying, is that I'm going to be going to fly on a trip to Antarctica in two days, when we get to Punta Arenas – I'm even more excited about that than going to Stanley!