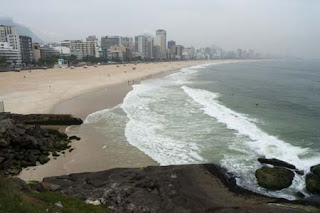 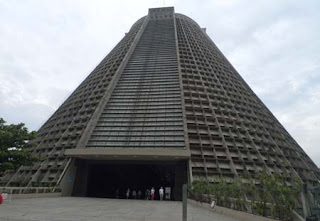 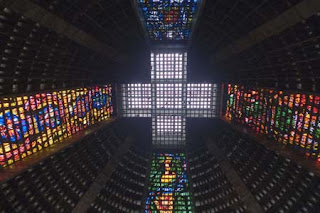 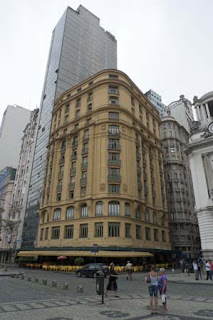 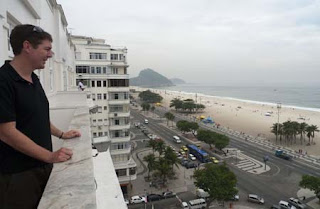 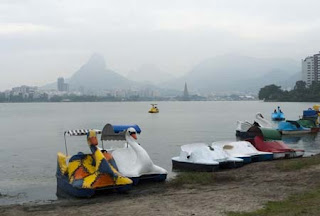 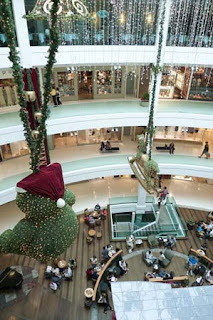 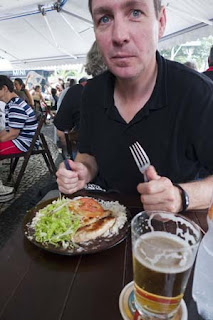 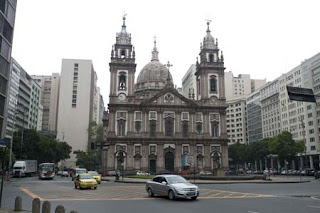 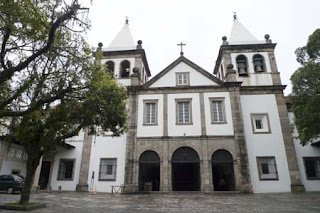 Of course, Rio is famous for its sun-kissed climate, its packed beaches, and the fabulous views of the statue of Christ The Redeemer, looking down benevolently from the stunning Corcovado – none of which you'll see on a rainy and misty Saturday like we experienced. The Corcovado was entirely covered in cloud, apart from the odd glimpse of a ghostly Christ-like figure which emerged from the mist a couple of times; while the beaches were virtually empty of people.

Yet, even on a disappointingly bad weather day, Rio was still beautiful, atmospheric and lively. We got a car to take us around the city to see as much as possible in one day, with the vain hope that the clouds would miraculously lift and we could whizz up the Sugarloaf or Corcovado for those world famous views.

We started off from the slightly dilapidated port area (it's due a massive overhaul for the Olympics) and headed into the Centro district which was mostly empty of people because it was a Saturday. We ended up at the amazing beehive-like Catedral Metropolitana, a vision in concrete created in the 1950s by visionary architect, Oscar Niemeyer. The sheer feeling of immense space inside this soaring spaceship of a Cathedral made you feel tiny, while the enormous stained-glass windows cast a warm glow over the interior.

Next, we headed to Copacabana, where our guide blagged us into the exclusive Copacabana Palace Hotel so we could enjoy its fantastic views over the beach from the top floor. Even on a slightly drizzly day, there were plenty of athletic beach volleyball games going on on the famous white sands, even if the usual show of Rio's bold and beautiful weren't strutting their stuff along the promenade.

After visiting Rio's enormous lake (crowded with joggers around the edge) we then moved round Rio's stunning bay, to have a look over Leblon and Ipanema, two of Rio's more upmarket suburbs, before heading into Leblon to have a look around. We went to the posh shopping mall, which would have graced Dubai, London or any western city – it felt a world away from the Rio you read about of favelas and street crime. In fact, it was too sanitised and upmarket for us, so we headed to the street to find something a bit more genuinely "Rio". We ended up at a street bar/restaurant, which lured us in because it was packed, scruffy, noisy and boasted that it served "o melhor chopp in Rio", the best draft beer in Rio – how could we resist?

The chopp was certainly good, and the fact that no-one spoke English made choosing lunch a lucky dip in which I got lucky, and Tracy not so lucky, but it was great to be in a real down and dirty neighbourhood joint (obviously it was quite a nice area, so it wasn't that down and dirty).

As the clouds were stubbornly refusing to lift and Christ the Redeemer was staying shy, we went for a visit to the Museu Bellas Artes, the Fine Arts Museum in the city centre – like much of the city, it was slightly run-down, but still very interesting. There were no artists we'd heard of before, and no really mind-blowing art, but there was some good stuff in there and it was fascinating to see how much "European" styles of art continued to influence the art of South America in the 19th and 20th centuries.

Finally, on our way back to the ship, we called in at an old colonial monastery on the hill overlooking the port – not quite as many cherubs on offer as in Salvador, but another example of over-the-top baroque.

So, this was a day to prove that Rio can be excellent to explore even if it's raining, that you don't need to go up Sugarloaf or Corvocado to enjoy yourself, and that this isn't just a place of street crime and favelas. Imagine how good it would be if the sun actually shone?