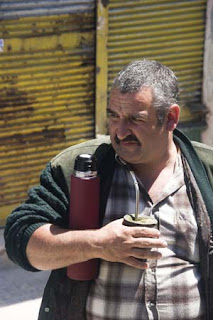 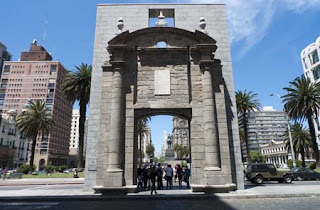 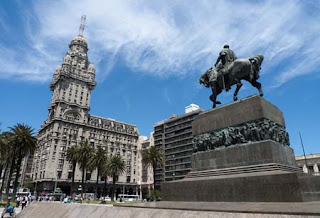 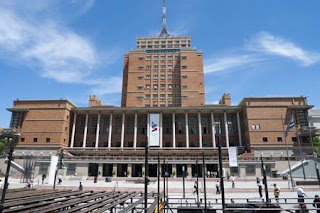 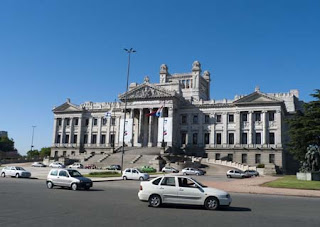 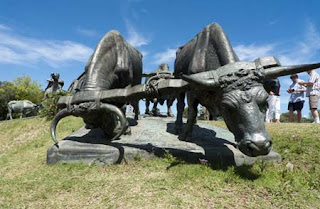 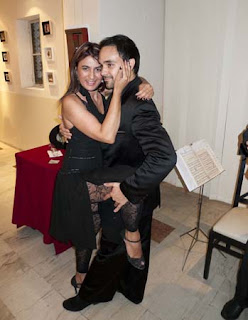 Sadly, bad weather meant that our delay into Uruguay's lovely capital, Montevideo was delayed, so we only had half a day to explore what's probably the most sophisticated South American capital. However, my tour had a wonderfully informative guide who really made her city come alive for us.

We first went into the city centre to see the main square, Plaza Independencia, which is surrounded by an eclectic mix of buildings that tell the story of the city – the colonial Government House dating from the days of Spanish rule; the huge statue of national hero Jose Artigas in the middle, telling the story of the struggle for independence; the 1920s art deco/gotham city inspired skyscraper of the Palacio Salvo dating from a period of 20th century prosperity; and characterless modern office blocks dating from the morally bankrupt times of the military dictatorship; while the lively pavement cafes tell you that the city is doing fairly well again these days.

From here, we drove out of the centre, to see the old football stadium where the first ever World Cup was staged in 1930 – a tournament that Uruguay won. Our guide proudly reminded us that Uruguay won the World Cup again in 1950 – a remarkable achievement for a country of only 3.5 million people.

Uruguay is renowned as being the most middle class nation in South America, and the gap between rich and poor here is the smallest on the continent – although when we went to the city's plush suburbs where the wealthy people live, you could see that there were plenty of people doing very well indeed. These suburbs are based around some beautiful white sand beaches – something many people don't expect to see here – another factor which makes this one of the most "liveable" cities in the region.

Our tour ended with a visit to the bizarre architecture of Casa Pittamiglio, the home of an eccentric alchemist who designed it like a Gaudi building on acid, with stairs going nowhere and a labyrinth of tiny rooms. Here we were treated to a short tango show, by some suitably grungey, but very skilful dancers. Our ever-patriotic guide was careful to tell us that the Uruguayan tango is more genuine than the Argentinean one, and that much of the best tango music is Uruguayan in origin.

She also claimed the Uruguayan beef is even better than Argentinean beef – this has now turned our next 3 days (in Buenos Aires and Montevideo again) into a beef-tasting trip (as if I'm going to need any excuses!).