April 23rd – A Pilgrimage to Petra 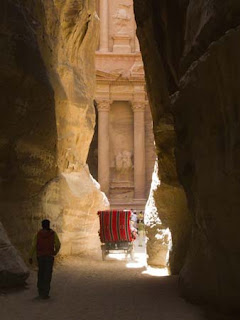 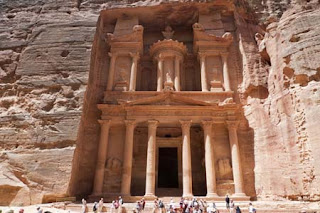 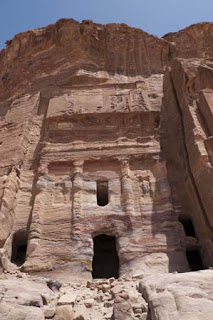 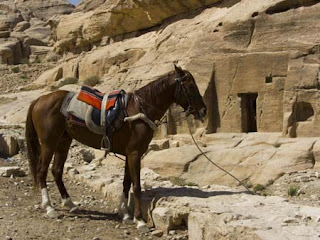 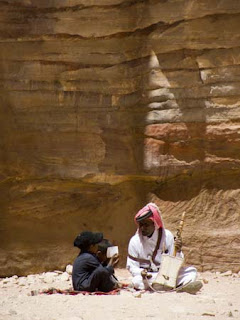 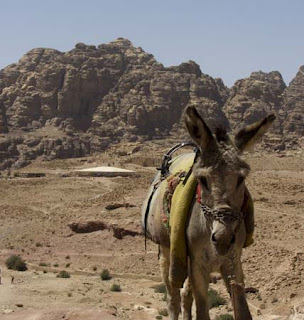 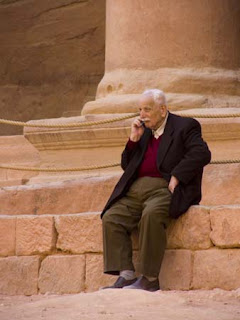 From Aqaba, we'd organised a private car to drive us the 2-hour trip to the amazing lost city of Petra. Our driver was excellent, but he didn't let the very small number of teeth in his head stop him from trying to chat up Bernadette who was travelling with us, but she somehow proved resistant to his toothless charms.

In between his incomprehensible chat up lines, he got us to Petra at top speed which enabled us to beat most of the coach parties that were all descending on this world famous sight.

After it was abandoned in the 7th century, Petra was then lost to the world for about a thousand years (apart from to the local Bedouin people who kept it secret); but, after it's rediscovery in the 19th century, it's certainly not a secret any more, as you could tell by the hordes of tourists descending on it. Actually, our guide told us that tourist numbers were down by about a half this year, so the locals (who are totally dependent on tourism) are feeling the pinch.

Fortunately, Petra's a big enough site to absorb the tourist crowds, and apart from in front of the incredible Treasury (the photo stop that everyone knows), the crowds disappear the further you go. What makes visiting Petra so incredible, is the evocative approach to the city – as you walk down the Siq, a narrow canyon in the rock, you pass from light to shade overshadowed by sheer towering walls of rock above you, catching glimpses of the odd ancient carving in the canyon sides, eroded into ghostly shapes.

As you progress down the Siq, the excitement mounts as you prepare yourself for the mind-blowing sight about to greet you – and, even though you know what you're going to see, the first glimpse of the Treasury glowing in the distance is an incredibly stirring one. I tried hard not to go for the clichéd tourist reaction of "wow", but you just can't help it – this place has certainly got the wow factor.

But, the Treasury is just the start of it – it's thought that the city would have supported over 50,000 people, so there's a theatre, baths, colonnaded streets, and countless more tombs cut into the red rock that can rival the Treasury for size and grandeur. When you see the dusty and barren landscapes that it's all set in, it seems virtually impossible that a city of this magnificence could ever have been a living entity, but the Nabataeans (the forgotten civilisation that built it all) were masters of water supply, so precious water was channelled down the Siq from the plentiful springs in the mountains – enough to support a city of this size.

For our visit this time, we wanted to explore an area of the site that we hadn't had time to before, and visit the "Royal Tombs" section, high up in the hills behind the site. From a distance the tombs look impressive enough, but once you've climbed up there, you just feel dwarfed by their size and haunting magnificence.

Like the Treasury, they're much more impressive on the outside, with their towering columns, splendid porticos and pediments carved into the contours of the rock; while inside, they were just empty cavernous spaces that almost certainly would have served no other purpose than housing a few bodies of the ancient VIPs who were interred in there. It was amazing to see how the striking patterns in the rock added to the beauty of the tombs.

Exploring this hot and dusty site is exhausting – so, even though you want to visit more and more of its riches, you have to pace yourself and know when enough's enough. So, after about 6 exhilarating but draining hours, we headed back to the entrance, and were relieved to see that our dentally challenged driver was still waiting for us, to take us back to the ship.

Another fantastic day in a place that really needs to be seen to be believed.