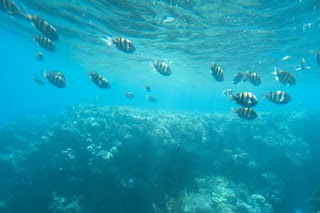 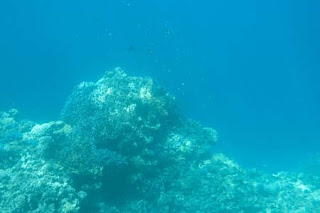 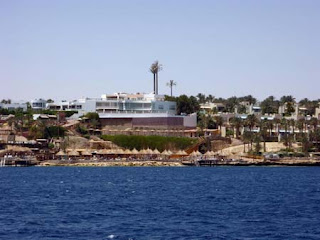 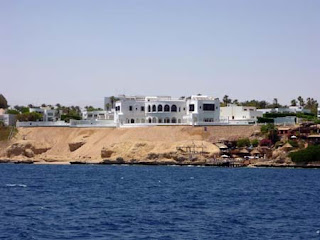 Last time I was in Sharm el-Sheikh about 16 months ago, there were a series of deadly shark attacks that occurred a couple of weeks after we'd been snorkelling there. Since then, the guilty shark has supposedly been caught – how did they know which was the perpetrator, doesn't one shark look like another? Also, they've cracked down on the practices which had apparently been encouraging sharks into the area. The theory is that ships that were carrying over sheep from Australia to Arabia had been tossing any dead sheep overboard, which was attracting the sharks and giving them a blood lust.

Tracy (very sensibly) wasn't prepared to believe my assurances that there sharks wouldn't come out to play today, so she took an aquascope boat trip instead – reassuringly separated from the water and the sharks by a thick wall of glass.

But, I was prepared to believe that it was definitely safe to go back in the water, so I didn't want to miss out on one of the world's premier diving and snorkelling areas. From the port, we took a bus to the fairly tacky resort of Naama Bay – a place which looks more like Benidorm than Egypt. You wonder how a westernised place like this will fare if Egypt votes in an Islamist President in May – tourism is already down about 50% because of the uncertainties caused by the Arab Spring (never mind the shark attacks).

From here we took our boat out to the spectacular Gordan Reef off Tiran Island; a place where the visibility is incredible and the colours of the coral are as good as any I've seen in the world. Although the water was colder than I'd remembered it being last year, we saw an amazing array of vibrantly coloured sealife, and more importantly, no sharks. In fact, the most dangerous looking creatures we saw were some pink jellyfish floating around like plastic bags. Every time I saw one, I started to hyperventilate, until I saw that a few of our party were picking them up and playing with them – in fact, they were quite harmless.

The sea was quite choppy and the current quite strong, so we were all pretty tired after 45 minutes of fantastic underwater views, so we were glad of the opportunity to rest and warm up in the sun as we sailed back to the port, before stopping off again at the Near Garden reef, for a final 25 minute snorkel.

I hope for the locals' sake that Sharm's resorts can resist any attempts by conservatives to shut them down, and that they can resist any urges to further overdevelop them, because these are some of the best underwater landscapes on the planet.