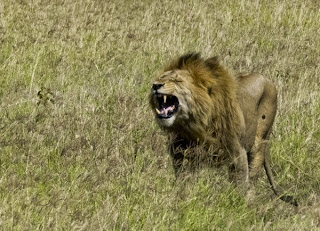 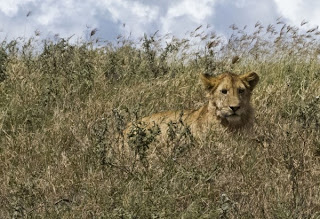 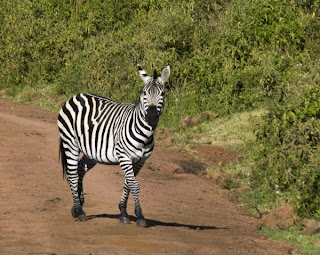 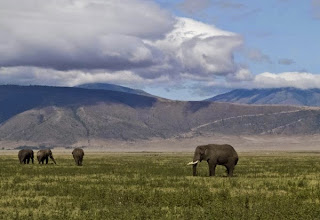 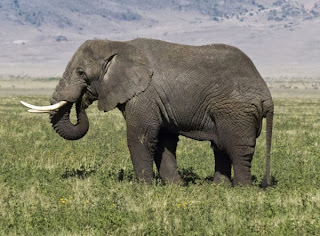 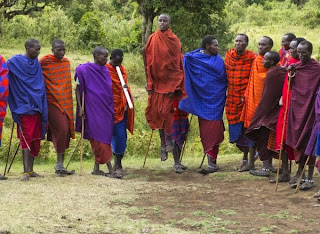 Leaving the seething, chaotic city of Mombasa is never too hard a prospect to contemplate, but when you're flying out to go on safari in the amazing Ngorongoro Crater, then you really can't wait to go. I was joining the ship's overland adventure that would take us on a succession of buses, light aeroplanes, and safari jeeps rides, from the urban jungle of Mombasa in Kenya, to the open spaces of Tanzania, and eventually to the spectacular caldera at Ngorongoro.

It took a long time to get there, but there was lots to see on the way - the flight passed by Mount Kilimanjaro peaking out of the clouds, while the bus ride passed through so many interesting villages with lots of colourful local life going on. It's hard to get the feel of a country from a jeep window, but Tanzania clearly has lots of challenges (in terms of its infrastructure and economy); however, the people aren't dirt poor and economic development appears to be moving fairly quickly. We got lots of waves and smiles from the locals as we passed, and generally, it seemed a fairly happy environment.

But, at last we got there, and arrived at the luxurious Exploreans Lodge – every need was catered for, and the individual lodges were simply huge. Seeing as Tracy was accompanying the trip to Galdessa Camp in Tsavo East National Park in Kenya, and staying in a tent there (albeit a glorified one), I did feel a little guilty enjoying the electricity, the hot water, the wifi, the mini-bar, and the views from my private terrace – ok, I didn't feel guilty for long.

So, the next morning, we were full of anticipation for our day in the crater, although that excitement was tempered a little when we could see the thick layer of fog that was enveloping the crater rim up above us. As we drove up the track, the fog only got heavier, and for a few minutes we were driving in a pure white out. It felt quite unlike any safari I'd ever been on, but our guide kept on telling us that these were quite typical conditions, and that it would soon clear.

Then, as we began to descend again into the crater, we finally got below the layer of cloud and we got our first thrilling glimpse of the enormous caldera below us. Even though I'd googled pictures of what it looked like, it was bigger, more open, and the crater rim that encloses it more complete than I'd expected. I often overuse the word "spectacular", but there's no other word for Ngorongoro – this is the largest (unflooded) complete caldera in the world, and it's created a unique eco-system for the animals. Providing the perfect environment for one of the largest collections of large mammals in the world.

The caldera provides such a great habitat for the wildlife because of the year-round presence of water – all that fog eventually feeds the streams, which in turn feed the lakes in the crater, which means that the animals don't have to migrate elsewhere for food or water. And, because it's so complete, it's easier for the authorities to patrol and prevent poaching.

Even though we were here to see the animals, every now and again, you just had to admire the stunning views – miles of open grassland, interspersed with small patches of forest, streams, marshes and lakes. However, the openness of the landscapes was just perfect for viewing game, and what an amazing concentration of game there was!

The first animals to come into view were a small herd of photogenic zebras. As ever with safaris, you go totally overboard on photographing the first thing you see, before you realise that there's much more interesting sights out there. Because, things just got better and better.

We next saw a few gazelles, a few elephants munching away on the grass, and then, we had the most amazing safari experience of my life, as we got to get up-close and personal with a huge pride of lions. It started when our eagle-eyed guide spotted a lone lion sitting upright in the yellow grass about 50 metres away from us. Then, another one jumped up next to him, then another, and another. Amazingly enough, they then started to troop over to our jeeps, nonchalantly coming up right next to us, to get into the shade of our jeep – it was unbelievable to be so close to these magnificent beasts, close enough to smell!

Then we realised why they wanted to use our shade rather than the shade of the tree a bit further along. There was already a dominant male lying under the tree, and for some reason he wouldn't let them join him. Nevertheless, they decided to give it a go, and they headed for the tree. As they approached, the male got up to tell them they weren't welcome after all, and when he moved, we could now see at least ten other lions in the bushes with him – I've never seen so many lions in one place.

So, we now had lions coming and going, before two more male lions showed up – one of them sniffing the air with his mouth wide open showing his enormous fangs, his mane billowing in the wind, like he was posing for that perfect lion roaring shot. Even I couldn't take a bad photo of that one. All in all, we saw 17 different lions.

At this point, you could have told us that our safari was over and we'd still be happy, but it was only 10am and there was so much more to see. The further we got into the crater, the greater the concentration of animals – a large variety of different birds, plus so many buffalo, gazelles, wart hogs, zebras, elephants, and huge herds of wildebeest. Wherever the wildebeest were, there would be some menacing hyenas stalking in the distance. It was fascinating to watch the patterns of movement as the hyenas ran after the wildebeest from different directions, hoping to isolate a sick or young animal. Luckily for the wildebeest, but unluckily for my photos, those horrible hyenas weren't successful.
Apparently, all of the Big Five do inhabit the park; and, with three of the Big Five ticked off within an hour, we wanted to see more. Although we had reconciled ourselves to not seeing an elusive leopard, we would have been disappointed not to have spotted a rhino. And, as our day in the crater was coming to an end, our guide delivered – pointing out a dark splodge on the horizon that he was sure was a rhino. Even with the most powerful binoculars it was hard to make out any features, so it may have been a rock or a cardboard cut-out, but we were happy to be able to say we saw the Big Four. It was an incredible day of game viewing.

On our way back to the lodge, we stopped in at a Masai Village, where the tribesmen in their colourful cloaks treated us to some of their trademark pogo-ing leaps as they sang their rhythmic chants. Even if it turned into a bit of a sales pitch for their handicrafts, it was fascinating to see how their traditional ways of lives persist as Tanzania modernises (although we had a sneaking suspicion that the basic mud huts were for show, and that they'd all de-camp to more modern accommodation as soon as we'd left).

A perfect day was completed with sundowners back at the lodge, as an elephant invaded the lodge's grounds to have a munch on the thick vegetation. Wonderful!

So, the next day was set aside for travel, as we drove to Arusha, and flew to Zanzibar to re-join the ship, where it suddenly felt that we had left Africa and arrived in Arabia. The previous 2 and a half days had involved a lot of travel, but every second of it had been worth it to get to the crater – the best safari of my life.