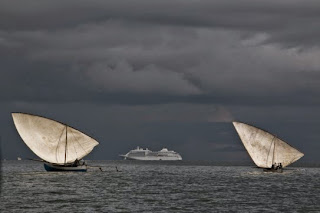 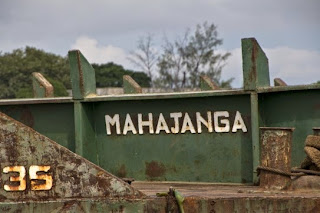 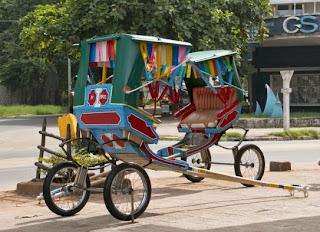 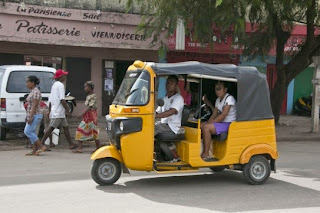 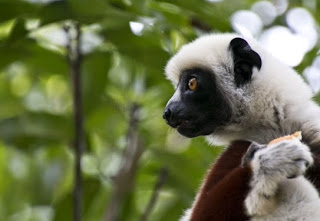 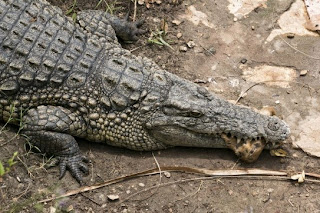 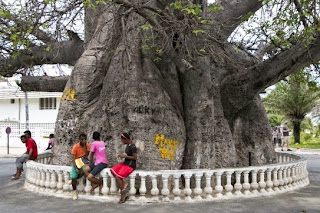 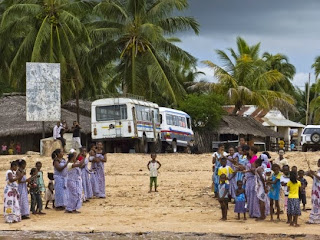 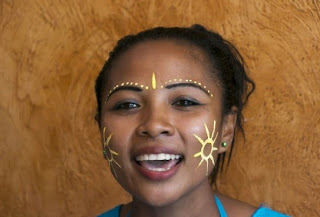 Even though it's the 4th biggest city in the country, the obscure port town of Mahajanga in north eastern Madagascar isn't used to getting many tourists..... and it shows. That isn't necessarily meant in a negative way, because the people we met had a real enthusiasm about them, and we saw a side of Madagascar that hasn't been adulterated in any way for us tourists. There is though, a downside to the lack of tourism - in that the infrastructure and the equipment wasn't really ready for a bunch of 5 star tourists. However, if you saw our visit as "an experience" rather than purely as a sightseeing opportunity, then it could be a fairly rewarding and definitely very interesting experience. Here, we were seeing the "real Madagascar".

Tracy went on a tour that took her around town and into the countryside beyond, so I'm using some of her pictures of town. However, while she saw that Mahajanga has a relatively developed infrastructure (all things are relative, so it wasn't very smart in the slightest), I joined a tour that crossed the wide estuary by speed boat and went to the Antrema Natural Reserve – a part of Madagascar that looked like it didn't even get visits from the Mahajangans, never mind from any tourists.

We'd been warned that the buses that were to provide our transport were going to be old and basic, but we really weren't quite expecting them to be quite as old or as basic as they turned out. The bus I travelled on must have been at least 50 years old, while instead of a windscreen, it had a sheet of plastic across it – God knows what would have happened if it had been raining.

But, when we saw the state of the roads, we could see why the suspension was shot, and why the bus was totally beaten up – the road was just mud, and it was totally rutted and pot-holed. After a push start, the old engine roared deafeningly as we slowly bounced, bumped, and ground our way along this assault course of a road – I dread to imagine what the Madagascans consider to be "off road", but it was unbelievable to hear that this track we were travelling on was officially designated as a National Road.

This was by a long way the worst road that I've ever driven on, and in my most dilapidated tour bus, but this really was a genuine Madagascar experience and it gave our trip an added adventure. With roads as bad as this, you can understand why the most repeated phrase heard in Madagascar is "mora mora" – slowly, slowly. Nothing happens (or can happen) here at a fast pace.

As we bounced along, out of the cracked windows, we got glimpses of Madagascan rural life – basic villages of straw huts populated with barefoot children. It looked pretty poor, but no-one appeared to be starving.

Eventually, after our vertebra-altering drive, we made it to our end destination – the Antrema Reserve, where we were greeted by an enthusiastic group of women, singing lustily and dancing energetically. After that drive, we needed someone to re-energise us, and they certainly did that.

Unfortunately, it had taken a long time to get our tenders into the port, so our time at the reserve was somewhat truncated; however, we had time to meet the "King" of the village (a man whose royal regalia appeared to be having the best sunglasses in the village). He insisted that we take part in an incomprehensible ceremony in his hut, which (almost inevitably) ended in some money changing hands.

We just about had time to see some white lemurs in the trees leaping around from branch to branch, before it was time to head back through the forest to our awaiting beaten-up transport. Somehow, the road didn't seem as bad going back as it had on the way there – maybe we'd got anaesthetised to the bumps by now.

In the cruising world there's not many places where you really are getting off the beaten track, but Mahajanga was it.