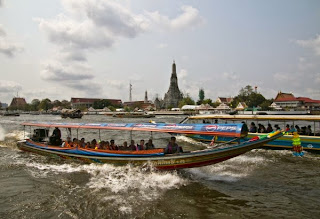 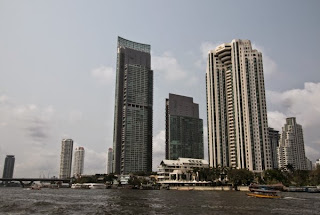 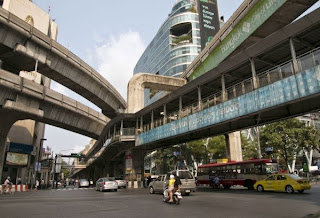 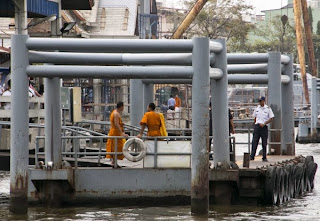 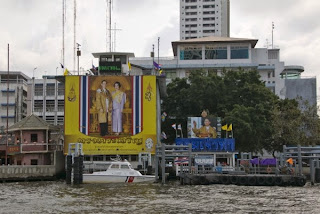 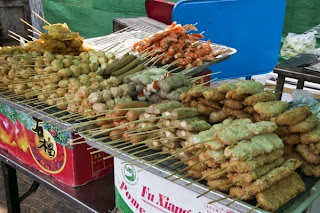 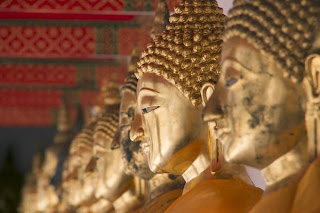 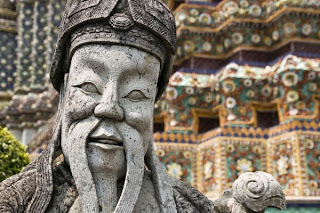 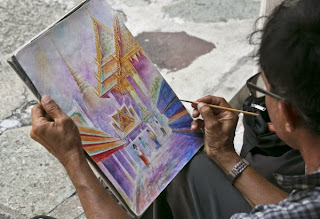 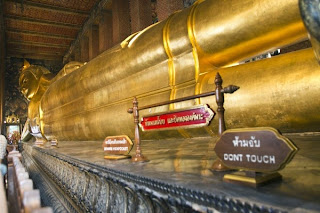 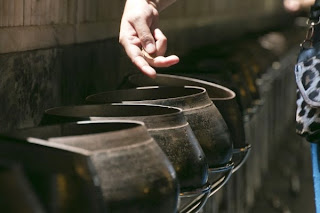 Bangkok can sometimes be like a slightly nightmarish version of the future – a place of huge motorway flyovers carved through the centre of the city that have done nothing to alleviate what must be some of the worst traffic of any city in the world. It can be depressing experience sitting in a taxi watching the meter tick upwards, with 8 lanes of gridlocked traffic stuck fast all around you, wondering if you will ever get to your destination.

So, today we decided to avoid that traffic as much as possible, by exploring some other transport options – by going with the old (the river), and the new (the Skytrain). We started with the Skytrain, which is a really efficient and comfortable way to get around (even if the ugly elevated concrete tracks above the streets help to add to Bangkok's claustrophobic atmosphere). Whenever I've caught the Skytrain, I always wonder why more people don't use it – it's quick, clean and air-conditioned (a must in this sweaty city). However, there's only two lines, and they don't cover the historic part of the city, which means that the main palaces and temples are cut off from the Skytrain.

But, the Skytrain does connect with the Chao Phraya River – the artery which always used to be Bangkok's main transport route. So, we whizzed down to the river and caught one of the river boats up towards the old town. It's from the river that you get a good perspective on the massive changes that Bangkok's undergone in the last couple of decades – where once there were shacks on stilts along the riverside, now there were lines of soaring skyscrapers. I guess that it's progress, but you wonder where those ordinary people who once lived there, have been displaced to.

It was amazing to see how the sense of congestion spreads to the river too – alongside our river bus, we shared the Chao Phraya with huge barges bringing sand or cement (presumably to build yet more skyscrapers), cross-river ferries, zooming longtail boats with their huge engines, and plenty of other aquatic public transport options. We passed by the tall prangs (spires) of Wat Arun (the Temple of Dawn), and saw the royal palace, its skyline an exotic mixture of soaring spires, tiered roofs and glittering peaks.

We finally stopped off at the Wat Po Temple – home to Bangkok's biggest Buddha, a huge reclining golden statue of the smiling Buddha about to enter Nirvana. We've visited Wat Po a number of times, but the size and simplicity of the statue never fail to impress; while the rest of the complex is extremely impressive too.

Rather than succumbing to the typical Bangkok phenomenon of being "templed out", we decided to leave our Buddha-watching activities to just that, so it was time to battle with the traffic again, to get to the Shuttle drop off point in the Dowtown area. As ever in Bangkok, the basic premise of getting a cab to a well known location is not as simple as it may sound. First, you have to find a taxi who will put it on the meter – the first three cabs we found would only settle for vastly inflated fixed prices. Second, you have to find a driver that won't take you in totally the wrong direction. After 20 minutes in our first cab, we were actually further away from our destination than when we started. He knew he was taking us for a proverbial ride, and didn't put up much protest when we bailed out. Amazingly enough, the next driver was both honest and knew where he was going, but even so, a journey that would take 15 minutes in any other city, took almost an hour – leaving us little time to do anything other than eat at the mall.

So, as ever, Bangkok was a heady mixture of the old and the new, the impressive and the depressing, the magnificent and the mundane. Whoever can solve its traffic problems will earn a nation's (and this tourist's) thanks.