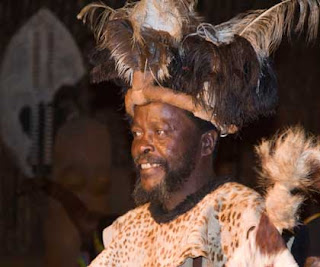 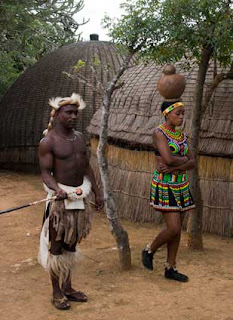 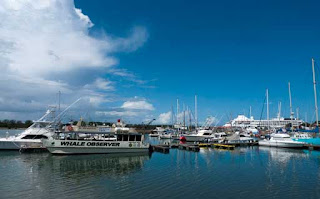 Today's trip was into South Africa's Zulu heartland, to find out more about Zulu culture and heritage. Unfortunately, urbanisation and modernisation mean that traditional Zulu villages and ways of life are increasingly being compromised by the 21st century, so our trip was to a "cultural village" rather than a real one. In fact we were being taken to a film set that had been created for the 1980s TV series "Shaka" about the 19th century King Shaka, who united the Zulu nation.

In spite of it being created as a film set, it looked and felt fairly genuine, and the singing and dancing were pretty good. We learnt about the social structure of the Zulus and their food and drink (more stomach-churning Zulu beer to be tasted); and then we were treated to a high energy dance performance, powered by some pulsating drum beats. A few of the performers were a little half-hearted, but the majority of them were putting their heart and soul into it; and, even if it felt a little more contrived and less spontaneous than the Xhosa dancing we saw at Khaya La Bantu earlier in the week, it was all very polished and well organised and everyone enjoyed themselves.

That evening, we walked from the ship to the Richards Bay waterfront to watch England beat France at rugby, and have a delicious and great value meal. This waterfront is the South Africa that the tourist board would like to promote – modern, funky, great food and atmosphere, and most importantly it's safe and relaxed.

Unfortunately, this laid back environment has had to be created behind razor wire and security patrols – hopefully, one day, this high level of security won't be needed.