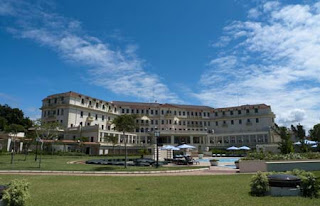 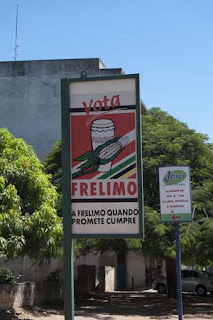 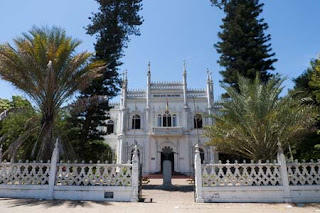 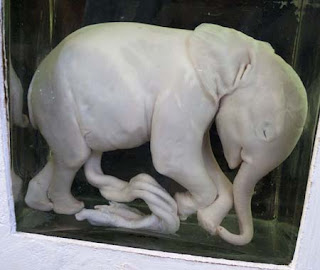 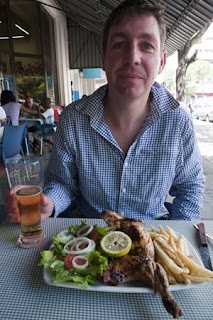 Maputo is really growing on me as a city. We even came close to saying the traditional Fleming phrase for anywhere we like the look of – "I could live here". This is probably pushing it a little, given the extreme poverty of much of the place, but it feels safe out there on the streets, and the people are friendly and don't hassle you.

Just to test the hassle factor, we went to the craft market, which is purely aimed at tourists. The vendors really weren't too pushy, and the prices seemed reasonable. We then walked over to one of the extreme ends of Maputo life, the opulent, 5-star Polana Hotel. This venerable old colonial hotel was built in the 1920s, when Maputo was gaining a reputation for being "Africa's Riviera"; and although it suffered pretty badly (like the rest of the country) in the Civil War, it's now been restored to its former glories. When you see how plush and luxurious it is, you can see that there's clearly money to be made in today's Maputo.

After this, we visited the Polana Mall, which is quite Westernised although still on a fairly small scale – the price of economic progress is usually that the Western brands move in, and as the place improves its infrastructure, Maputo could be in danger of succumbing to the indentikit developments which are pretty much the same the world over. Fortunately or unfortunately, depending on your point of view, Maputo's often dilapidated city centre has a way to go before it gets too Westernised.

After sampling the Maputo retail experience, it was time for a bit of culture, so we walked down to the city's best museum, the Natural History Museum, housed in a beautiful white colonial building. The outside of the building has been given a new coat of paint, but the inside hasn't fared quite so well. The dusty collection of stuffed wildlife is looking a little moth-eaten by now, but I'm sure that it's a great teaching tool for the local schools. The most bizarre exhibit was a display of elephant foetuses from the 22 month gestation period of the elephant – these were real foetuses preserved in formaldehyde, that are the result of a 1930s elephant-killing spree to clear the land for a proposed business development. I don't know which was more disturbing, the fact that someone went and collected all these foetuses from the dead animals, or that 2,000 elephants were killed for a development that never actually went ahead.

We missed the chance last time we were here, but I've been promising myself that I would taste my favourite Mozambican dish (admittedly the only one I know), delicious chicken piri piri. To guarantee that we got the genuine article, we went to a restaurant that had been recommended to us – the imaginatively-named "Chicken Piri Piri Restaurant", which had a nice veranda to ensure that we could people watch the street action while we stuffed ourselves. Fortunately, the restaurant lived up to its name, and served up a delicious and spicy dish that satisfied my greed. Seeing as it was washed down with a couple of local beers (vital re-hydration on an incredibly hot and sticky day), we could scarcely rouse ourselves after this feast, and we headed back to the onboard aircon.