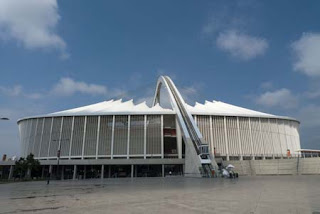 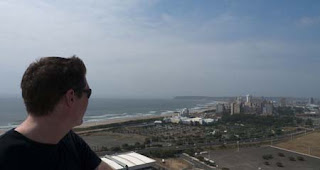 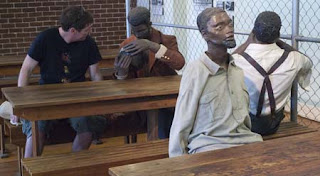 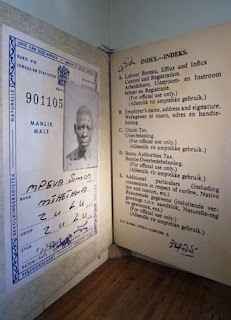 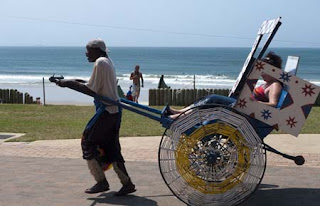 Durban is one of those cities that on the face of it, seems to have it all – a gorgeous beachfront, historic buildings, and a cosmopolitan mix of people. However, the reality of modern Durban is that there are many parts of the city that you just wouldn't want to be wandering around on the streets on your own; so today, we did everything by cab.

We first went to the gleaming new Moses Mabhida Stadium, which was built for the 2010 World Cup, and is a symbol for Durban's urban regeneration. The stadium's main feature is an enormous arch that sails over the top of it – you can get a cable car up to the top for some great views over the city and the waterfront. It was pretty windy up there, and I felt fairly sorry for the trembling girl who came up in the cable car with us, about to do a bungee dive off the top.

Some people have told us that the stadium is a great white elephant, because the crowds who come to watch the domestic football here number around 5,000 (in a 55,000 capacity stadium), while much more popular rugby matches are played at the Kings Park stadium just across the way. However, the manager of the cable car operation told us that the stadium could stage no matches or events and still turn in a profit – just because of the addition of that arch. At peak times, 7,000 people a day will pay to get the cable car up to the top. Very clever!

Next, we went to the KwaMuhle Museum which uncovers the story of Durban's black population during the days of the dreaded "Durban System" and the hated Pass Laws. In colonial times, the indigenous population were clearly only considered good enough to do the manual labour, but the white population didn't want to share the city with them; so the labourers were forced to live in hostels around the edge of the city, and weren't allowed to be in the city without a valid pass.

The administration of this pass system, was ingeniously (or more accurately, deviously) paid for by creating a monopoly on the production and sale of sorghum beer, which kept the African men compliantly sizzled, and at the same time making them pay for the system that kept them downtrodden. When you see the history of exploitation and suppression of the majority of the population, it's not difficult to see why Durban has so many obstacles to mending its broken society.

To cheer us up, we went down to the beachfront to stroll along its glorious promenade. As we watched the surfers, we chatted to an African guy who's part of a project to teach township children how to surf, to give them an alternative focus in life, and hopefully lead them away from a life of crime. He was such a kind, dedicated and earnest young man, that it gave you real hope that Durban can have a more prosperous future. Let's hope so.