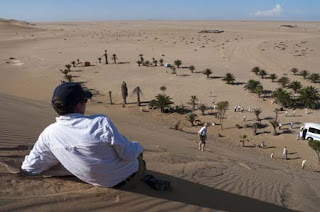 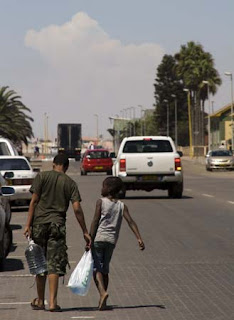 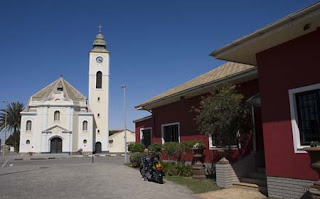 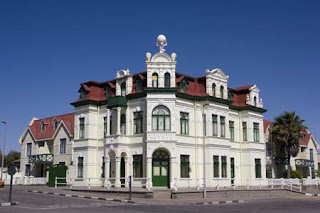 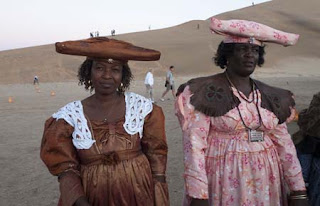 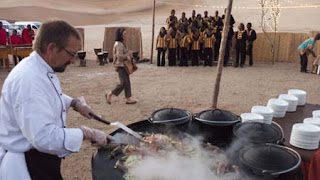 As we sailed towards the port of Walvis Bay, you got a sense of how the whole town is totally surrounded by the golden sands of the vast Namib Desert. Seeing this remote oasis of port cranes and low-rise buildings encircled by empty dunes, it feels like the inhabitants of Walvis Bay must feel pretty isolated from the outside world.

Namibia is a rarity in Africa, as one of the few ex-German colonies, so here there was an intriguing array of German colonial buildings to discover in the town of Swakopmund, about 20 miles north of the port. The town was founded by the Germans in the 1880s, and was the main colonial town on the coast until the Germans were ejected from Africa during the First World War, so there were many typically German-looking buildings dotting the town. If it weren't for the piercing African sun and the desert at the end of the streets, you could easily be in a Bavarian town, as you walked past the gabled houses and half-timbered buildings.

Maybe because of the charming historic atmosphere and the relaxed way of life here, this part of the world has become a favourite holiday destination for Angelina Jolie and Brad Pitt – in fact, they had their daughter, Shiloh, in Swakopmund. In Namibia's post-apartheid constitution, it's a criminal offence for anyone to restrict another person's movement, so Brangelina appreciate the fact that the local police will arrest any paparazzi who get in the way of their most famous visitors.

As we drove through the desert on our way back from Swakopmund, we called in at the imaginatively-named Dune 7 – the area's highest sand dune. Tracy and I boldly attempted to climb the steep dune, but with every sweaty step, the sand gave way and you sank back to almost the same spot. After 10 minutes of thigh-burningly hard climbing, we were only half way up, and we collapsed in a heap on the sandy slope to enjoy the fantastic views over the majestic dunes stretching as far as the eye could see. Fortunately, coming down was A LOT easier than going up, so we slid down on our behinds, gradually scooping up most of the desert into our pockets (and other parts of our bodies too).

Once we were back to the ship, we just about had time for a quick shower to wash the desert off us, before we were picked up to go back into the desert again, for one of the highlights of the cruise, a complimentary "Silversea Experience" of a night under the stars. After a very bumpy trip into the middle of nowhere, we pulled into a gap between the dunes, and emerged into what seemed like a mirage – a huge marquee in the middle of the desert, with the surrounding sand dunes magically lit up by candles as the sun went down in the distance.

We were greeted by Herero ladies in their colourful local dress, and by a fantastic local choir who serenaded us with their catchy African rhythms. After a magnificent dinner (quite how they got all this food and drink into the desert, I'll never know), we were treated to a hypnotic fire-dance performance and yet more fabulous singing from the choir, underneath a bright blanket of shimmering stars.

This was another of those wonderful occasions where you have to pinch yourself to confirm it's all real – a truly magical and unforgettable night!