March 15th – A Walk On The Wild Side in Namibia 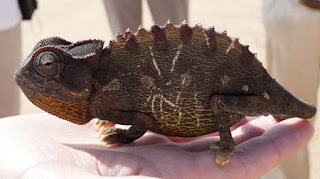 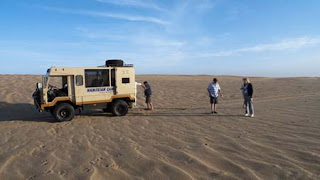 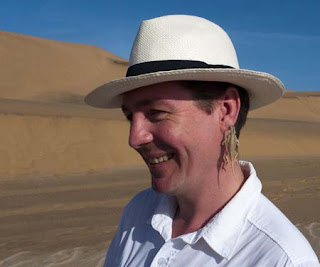 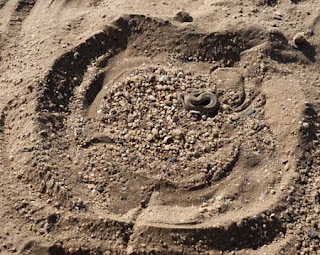 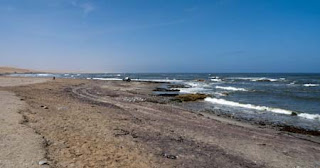 When the alarm went off at 5.45 am, I was beginning to regret volunteering to go on "The Living Desert" tour. At least at that early hour, it wasn't too hot, but once we'd got into the desert in our 4x4, it soon started to heat up.

Our guide was a straight-talking Afrikkaner, Francois, a bear of a man who'd been brought up next to the desert, so he knew all the best places to find the desert's hidden wildlife. Initially, when you drive into the vast empty spaces of the open desert, you'd have thought that this wilderness couldn't support much life at all, but Francois knew exactly where to look to find a remarkably varied array of flora and fauna.

We'd be bumping along the desert sands, when he'd stop the car abruptly, hop out of the car and start running up what looked like an empty dune. He'd then start burrowing into the sand with his hands, and come back to us, with a hidden present.

Our first gift was a little lizard – as I was the escort on the tour I became his stooge, so he first got it to clamp onto my finger with its jaws. Not being a great fan of creepy crawlies, I gritted my teeth and bravely took this in my stride, so he upped the stakes and told me that he was going to stick him to my ear. So, with my heart nearly beating through my chest, he got this baby dinosaur to clamp onto my ear lobe as I attempted to look calm in front of the passengers. Somehow I managed not to scream when the lizard fell off and almost went down my shirt.

Next, we found a fearsome-looking but thankfully small sidewinder snake, and fortunately, seeing as these can give you a nasty bite, Francois didn't feel the need to hang him off any part of my body this time. Somehow, he also knew where to dig down to find a beautiful gecko that lived underground and only came out at night – he had to show us the gecko in the shade, because if the directly sunlight fell on him, his skin would immediately have blown up into blisters.

Our final close encounter was with a chameleon – how Francois spotted this expertly camouflaged creature in the undergrowth of a remote desert bush, I'll never know. We began to get the feeling that he'd spent the night before hiding these creatures strategically around the desert. As we admired the chameleon, it was immediately plonked on my unsuspecting hand, its tiny claws digging into my skin to grip on. As you stare face-to-face with a prehistoric-looking chameleon, it's a bit unnerving as one eye fixes your gaze, while the other eye swivels round independently to look at something else. And at the same time as I was holding him, his skin slowly changed colour from the dark green of the shade of the bush – unfortunately, in his palette of colours, he didn't have a bright red to match the colour of my red face.

By now, we had become experts in animal tracking, so as we dove over the soaring dunes, we were spotting lizards, beetles, hyena tracks, and snake trails – it's amazing how much life there is in this most bleak of environments if you just know where to look. A great tour.