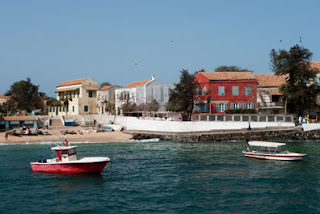 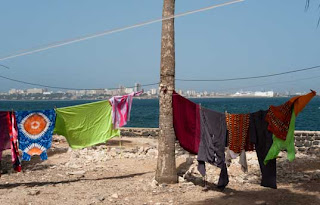 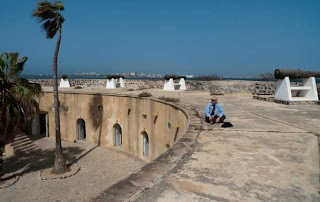 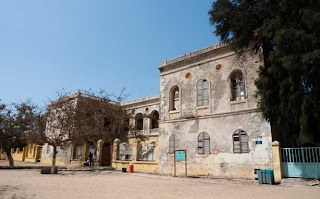 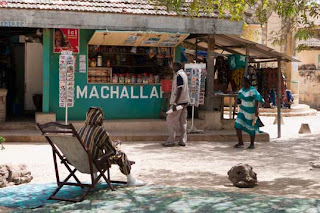 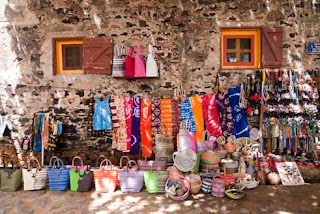 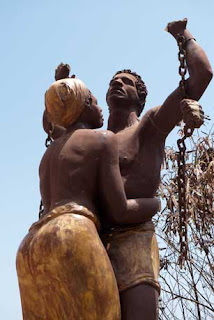 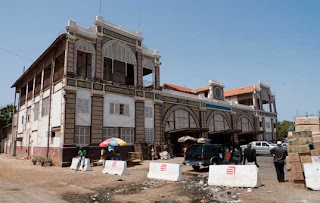 Darkar in Senegal, can be Africa at its most chaotic – the traffic is terrible, the streets are crumbling, and the hassle that you get from the persistent hawkers and street vendors is unrelenting at best and bordering on the aggressive at its worst. It's also a vibrant modern city that's growing all the time, where a well-off elite are doing pretty well, even if the ordinary man in the street has to struggle hard to make a living.

Instead of taking on Dakar's urban jungle, we took a softer option of going to the historic Gorée Island by public ferry. Just walking round the docks from our berth to the ferry terminal was a good introduction to the city – with a non-existent health and safety regime here, we were able to walk in between the huge trucks shifting enormous containers in a non-stop helter skelter of jerky movements. Then, when we got out of the industrial port, we immediately attracted a "guide" who wanted to escort us to the ferry and then around the island. He helpfully pointed us to the incredibly obvious terminal building, and informed us that we couldn't use Euros to buy our tickets, and he knew somewhere to change our money.

The tourist's first rule of Dakar is never to believe a word anyone says to you, so we tried to outpace him on our march to buy the tickets. He doggedly trotted alongside us and was still telling us we couldn't use Euros as we were in the process of paying with Euros – I pointed out to him that this fundamental lack of knowledge didn't do his guiding credentials much good, nor did it make us feel inclined to trust him. He didn't seem to care, and told us that he'd meet us once we got to the island.

As we waited for the ferry, I got talking to some friendly local women in my schoolboy French, which taught us another Dakar lesson – almost anyone you talk to, will try to sell you something at some point. So, it turned out that these women ran souvenir shops and were soon trying to persuade us to visit their shops on the island.

Once we were on the ferry, it appeared that there was a special occasion going on – normally a ferry ride isn't accompanied by the presence of three film crews and lots of well-dressed VIPs. It turned out that today was the day when the Transatlantic Slave Trade was commemorated around the world. They were all converging on this idyllic little island, because up until the 19th century, Gorée Island was one of the main staging posts of the cruel slave trade, when thousands (possibly millions) of slaves stolen from Africa, were corralled here like cattle, before being crammed onto the slave boats bound for the plantations of the Americas.

However, when you arrive at this tranquil little hideaway, it's hard to believe all this traumatic history could have taken place here – it seemed just too beautiful to have witnessed such terrible events. With all the historic buildings painted in beautiful pastel shades and many covered in colourful bougainvillea, the place had more of the feel of a French Provencal village, or a Caribbean island.

Of course, the hustlers and the vendors do their best to take the gloss off the place, so we attached ourselves to one of the tour groups to get beyond the first line of hasslers, and then made a bolt for it in the opposite direction to everyone else. We did well and we weren't followed – later we met a couple from the ship who'd spent the last two hours trying to shake off an unwanted guide.

We visited the historic round fort overlooking the tip of the island, which the French had built on taking the island in the 17th century, and we enjoyed the views from this peaceful haven over the sea to Dakar, its skyline absolutely crammed with buildings jostling for position.

We explored the quiet sandy streets, and made our way to the island's number one sight – the Slave House. This house was one of 28 slave houses on the island, but this one has become a symbol of the evils of the slave trade. As you walk around the dank dungeons on the ground floor were the slaves were held, mostly chained to the wall, it's difficult to comprehend what these poor souls must have felt, snatched from their homes, treated worse than animals, and about to be taken to another world where no-one spoke their language or gave a damn about their welfare.

After this sobering visit, we walked up to the hill at the top of the island to enjoy the views, and had to run the gauntlet of the stall holders on the way up – almost exclusively people we'd shared the ferry over with, who felt that we'd "promised" to visit their particular stall. Even though we're the meanest travellers around, even we felt guilted into visiting the stall of the lady that we'd spoken to the most, and so we ended up buying stuff we really didn't want.

As we waited for the ferry, we had a relaxing drink on the beach in totally idyllic surroundings, as we were serenaded by a constant parade of buskers and yet more people trying to sell us stuff – even they couldn't take away from the chilled out Gorée vibe.

Of course, any relaxed vibe disappeared immediately, as soon as we set foot in Dakar's sweaty streets, so we did a little exploring in the chaos, before we returned to the serenity of the ship for some peace and quiet.