March 4th – Bitten By the Safari Bug in East London 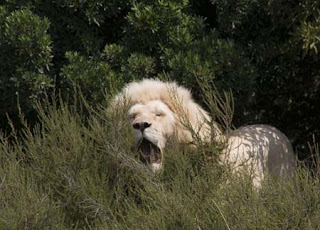 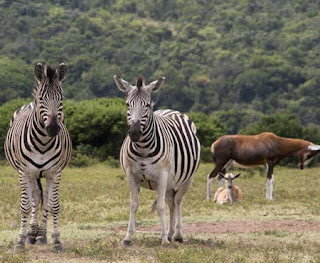 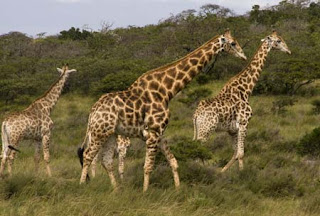 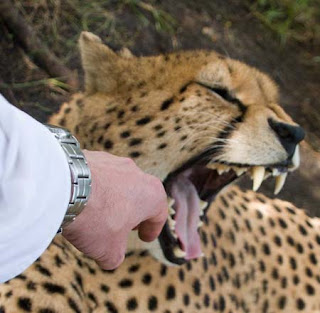 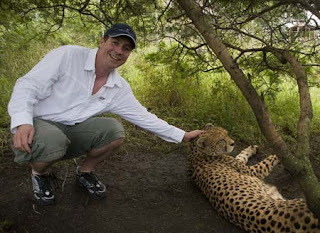 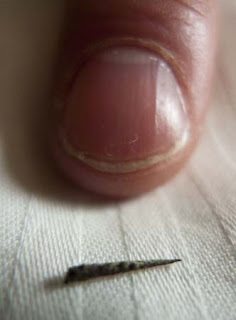 From East London, we travelled for about an hour to the excellent Inkwenkwezi Private Game Reserve. Being a private game reserve, it was much smaller than the National Parks, but it did mean that the rangers could almost guarantee that we'd see the main animal sights. When the giraffes preferred to stay in the trees rather than come out for us, they sent in one of the workers to go and flush them out so we could see them. The elephants were so used to human contact, that they came to us, rather than us having to find them – the down side to this was that they are often over-enthusiastic and clumsy, so our ranger was ready to reverse fast if they came too close or got too boisterous.

There's not quite enough game here for this to be a totally self-sustaining environment – the lions were kept in a separate fenced off (but very large) enclosure, so that they didn't kill off the precious zebra or impala population, and so they're fed cow carcasses rather than having to hunt for their dinner. The picked-clean skulls and skeletons lying on the grass as you come in, give the lion section a menacing air, while the ranger was surreptitiously passed a pistol, as he went through the gates – whether this was reassuring or alarming, I'm not quite sure. The ranger seemed to have every reason to be careful - as we slowly drove past the male lion resting peacefully under a tree, he suddenly charged out from the undergrowth at us roaring threateningly. It's amazing how quickly our old Land Rover could accelerate when it needed to!

The park was very well managed, and the rangers made sure that we got very close up to the wildlife – it's strange to think that you often see more animals in a small reserve like this, than in the much better stocked larger parks. Perhaps the highlight was going to see their three hand-reared cheetahs, which were in a separate pen. These full-grown cheetahs were so tame, that we were able to go up to them and stroke them! It certainly felt very odd, walking up to a large and normally dangerous wild animal and petting it like it was a housecat, but apart from size, they were just the same. They immediately started purring when they were stroked, and would roll over so that you could tickle their stomachs.

Everyone was understandably very apprehensive at first, not helped by the fact that when I squatted down to stroke one of the cheetahs, my sunglasses fell out of my pocket onto the ground – the rattle from the glasses, startled the cheetahs who ran off like, well, scalded cats. For the people who were stroking them at the time, their hearts must have been in their mouths, as these placid prone cheetahs suddenly shot to life.

Fortunately, they calmed down again, and I couldn't get enough of playing with the cheetahs – you quickly forget that these are natural born killers. Their fur was rougher than I expected, but I had to fight hard the urge to rub my face into theirs like I used to with my cat at home - it felt very surreal, but it was a wonderful experience.

So, I walked out of the cheetah enclosure with a real spring in my step, thinking that life can't get much better than this, when I was quickly brought back down to earth, when I was suddenly stung by a huge wasp on my ear. I didn't actually see the wasp, but I think it was roughly the size of a helicopter, and to cap it off, it then went down my shirt and stung me on the stomach.

The pain was absolutely excruciating and I let off a tirade of choice expletives which I hope none of the passengers heard – I now know the pain that Vincent Van Gogh felt. Over lunch, I sat there with a dripping ice cube held to my throbbing ear, and fortunately someone pulled out the huge barb for me – roughly the size of a spear (or at least a centimetre long).

So, a fantastic day at a wonderful game reserve, only slightly tempered by the pain of having my ear almost chewed off by a homicidal wasp.

PS – my swollen ear is now sticking out bizarrely and about 30% larger than normal.