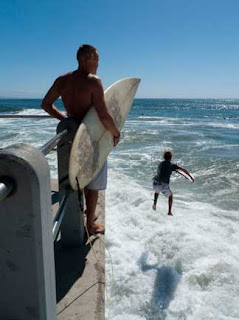 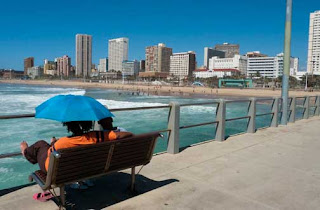 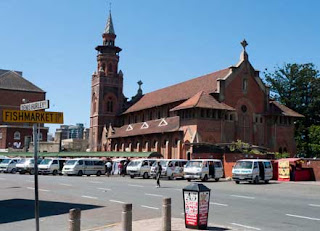 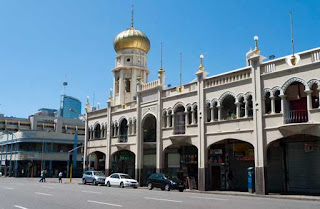 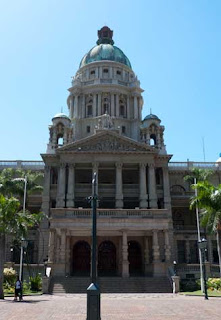 Only a half day in Durban today, so it was an early start to get to Durban's beachfront. Even though it was only 9am, the beautiful wide sandy beach was busy with people sunning themselves and swimming. This beachfront has got to be Durban's best feature – clean and safe, plus great waves. As we walked along the beach, it was interesting to note that although racial segregation has long since gone, to some extent, the different races still tend to stick together – the end near the Shuttle Drop Off point was nearly all white, while the further down you went, the less white it got.

We went along a pier, where the brave surfers launch themselves into the pounding waves and struggle to make their way out to where the waves break, and then ride the foaming 12 feet high rollers – it really made us wish we could surf.
After this, we took a taxi to the Indian district to go to the famous Victoria Street Market. Being a Sunday, the market was much quieter than normal, and some of the streets around the market had a vaguely menacing air – whether that was in our imagination or not, I don't know, but after exploring the market, we didn't hang around long enough to find out how safe the streets were.

So, we went to the centre of the old colonial city, where there's a fine range of grand civic buildings from Victorian times when this was one of the boom towns of the British Empire. We went to the imposing City Hall (which incidentally is a carbon copy of Belfast's City Hall), and visited the art museum, which had a fascinating collection of art from the Apartheid Era. It was sad to see how much the sense of social injustice and violence had permeated into the consciousness of the artists from this dark period of the country's history. In the same building, we went to the Natural History Museum, which had a dusty collection of stuffed wildlife – probably better to see them running in the wild on safari, but this was a much cheaper alternative.

We then wandered around Durban's cosmopolitan city centre, savouring its interesting mix of African, Indian (over one million people of Indian descent live here), and European influences, before it was time to race back to the ship before it sailed.