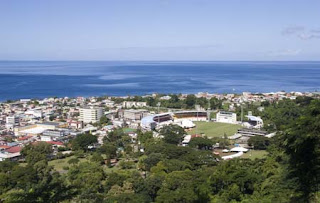 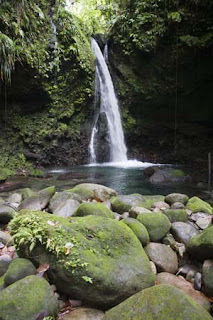 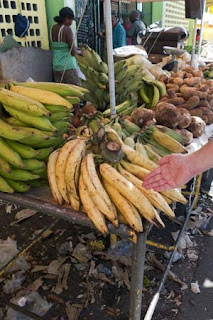 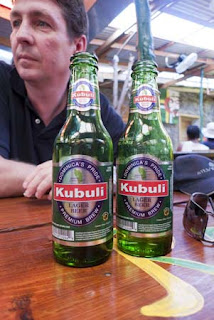 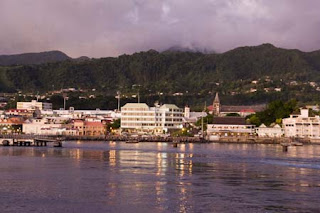 Dominica is one of the least developed of all the former British West Indies – something that I see as a major plus. As an impediment to tourism it has no international airport, hardly any of those typically pretty Caribbean sandy beaches, and hardly any tourist developments (less than 1,000 hotel beds on the island).

In its favour it has hugely impressive natural scenery, amazingly fertile rainforests, and a genuine Caribbean atmosphere out on its busy, if a little scruffy, streets. Today I went on a tour into Dominica's main attraction, its steamy rainforest, thick with vegetation and dripping with fertility. The bumpy roads wind around the incredibly steep hills behind the capital Roseau, and you're transported into another world of tall trees, hanging vines and thundering waterfalls.

Our first stop was at the impressive Trafalgar Waterfalls, where we trekked into the thick forest, passing huge ferns (like something out of Jurassic Park) and mossy rocks, and emerged to see twin waterfalls, over 100 feet high, their waters crashing down into unseen rivers below. You expected to hear Tarzan's cry echo across the valley ahead of us.

Next, we headed to the Emerald Pool, an idyllically situated green pool at the base of a 30 feet high waterfall, where you could jump in to cool off, and then stand under the thumping waters of the waterfall. It was exhilarating, cleansing and energising all at the same time – fantastic to experience such unspoilt nature.

Once we were back in Roseau, we explored it's charmingly dilapidated streets – busier than usual because of a music festival that was starting that evening, and lots of people were in their traditional Creole clothing. As the temperature went up to baking, we retreated to an excellent bar, where the locals were getting in the party spirit for the evening – drinking rum or beer and gyrating to the loud Creole music. It was a shame we had to leave at 5pm, because the cold beers were flowing nicely and the atmosphere was really hotting up.

My favourite stop of the cruise so far.