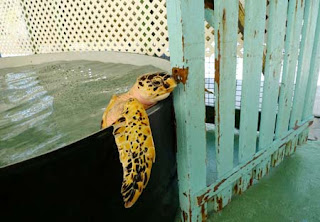 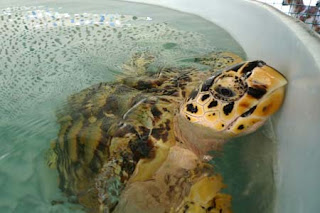 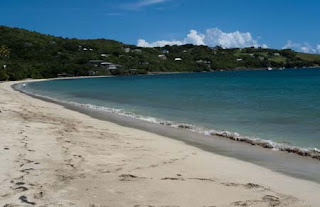 Today I did the "Best of Bequia" tour, which showed us the best that this tiny little island has to offer. Bequia's assets are its unspoilt vistas, friendly people, and gorgeous beaches, and we got to experience all of this and more.

Our minivan took us up to the remains of Fort Hamilton on a hill overlooking Admiralty Bay below, where our ship was at anchor – the rusting old British and French cannons a reminder of the island's 18th century history, when ownership of the Grenadines see-sawed between Britain and France.

Then we went to the Old Hegg Turtle Sanctuary, where sterling conservation work is done to protect the island's turtle population, which is hunted (entirely legally) by fishermen for their meat. Different tanks held hundreds of turtles at various stages of their development – from loads of tiny little baby turtles flapping around the water drunkenly, to enormous adults straining to climb out of the tanks to say hello – how anyone can eat these beautiful creatures I don't know.

Our final stop was at the Bequia Beach Hotel, a new luxury development being put together by a Swedish owner, who's struggling to get Bequia on the tourist map. It's all been very tastefully put together, so I hope that he can get it to pay its way, although I'm not sure that the island's attracting enough high-end visitors yet.

We were greeted by a glass of champagne, and then shown down to the beach – a gorgeous stretch of white sand with no-one on it apart from the 8 of us on the tour. I had a swim in the warm sea, while others took it in turns to have a soothing massage by the beach – it doesn't get much more decadent than this, having a massage with just the sounds of the waves as a background theme tune. It would have sent me comatose, had the masseur not decided to attack the many knots in my back which virtually had me yelping like a girl with the pain.

Finally, we had a lobster lunch – the locally-caught lobster is slightly drier than Maine lobster, but delicious nonetheless – and then time for another swim before we were due to go back.

It was the kind of day that I'd imagine a pampered Hollywood star would have most days of life – I could get used to this. A truly lovely day in a picture-perfect environment.