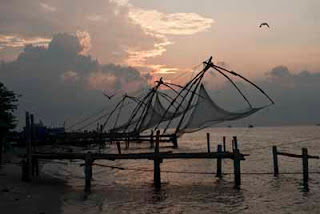 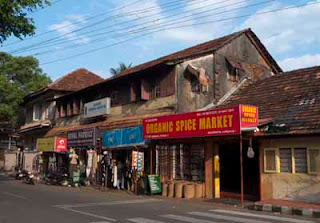 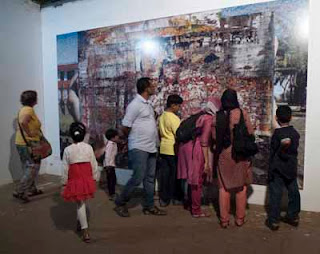 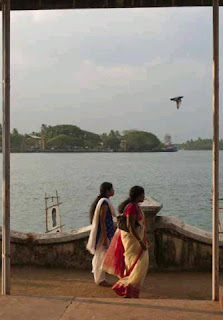 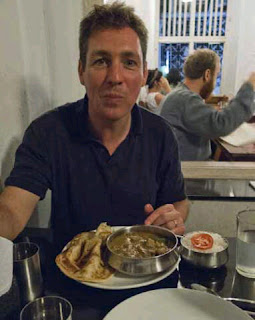 As we didn't get into Cochin till 4pm, we didn't have too much time to explore today, so we made the focus of our day, finding a good, authentic curry in Fort Cochin. Getting off the ship, we had to ignore the crowd of taxi drivers and tuk tuk drivers who surrounded us and tried to drag us into their overpriced taxis. We ignored their offers and headed to the ferry station where the price to get over to Fort was 2 rupees (about 1 cent US), as opposed to the $5-$10 prices we were being quoted. Not only was it so incredibly cheaper, but it was also quicker and a much more atmospheric way to travel, sailing across the tranquil waters of Cochin's harbour.

Once we got there, it was obvious that something was going on in town – an art exhibition called the Kochi Biennale was going on in various buildings in Fort Kochi. As we only had an hour before it was due to finish, we went to the main exhibition in the abandoned Aspinwall's warehouses just before you get into town. I'd always walked past these once-grand but now-crumbling set of buildings wondering what was inside, so it was interesting to walk around its complex of huge warehouses.

Rather than containing the spices and rice that once would have been shipped out of here, they were now home to some fairly weird and wacky installations that would have rivalled any of the bizarre stuff that we've seen in the Venice Biennale. To be honest, I had very little understanding of the artistic ideas being put across, but it went to show that the Indian art scene is every bit as advanced and bordering on pretentious as anything we have in the West. Maybe I'm just a philistine, but a lot of this stuff seemed like a case of the Emperor's New Clothes.

Anyway, for an hour it was interesting to do something a little different here in Cochin, and then we wandered into the Fort area to take our obligatory shots of the famous Chinese fishing nets – they looked particularly photogenic as the sun set behind them. Our next stop was Tracy's favourite Cochin shop, the imaginatively-named Shop 'n Save, where she bought a year's supply of ayurvedic lotions and potions. I doubt that the friendly shopkeeper has ever sold as much cosmetics in one go, so he treated us like royalty.

After calling home in an internet cafe where I got eaten alive by mosquitos (just my left knee has 9 bites on it), we headed to a restaurant we've eaten at before, called Dal Roti. As we approached, the long queue of customers waiting outside was a good and a bad sign – it meant a wait of about half an hour, but it did mean that the place was good enough to attract plenty of customers (and plenty of locals) who thought that it was worth the wait.

As ever, the food was delicious (and pretty cheap), and the only reason that it didn't score higher marks on my Chicken Jalfrezis of the World Index, was that I couldn't wash it down with a beer – not that many restaurants in Cochin actually serve alcohol.

By now, it was too late to get the ferry, so we had to begrudgingly spend $5 on a taxi back to the port.