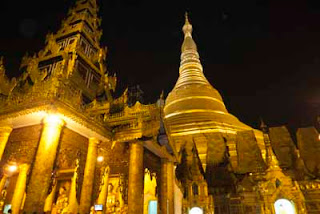 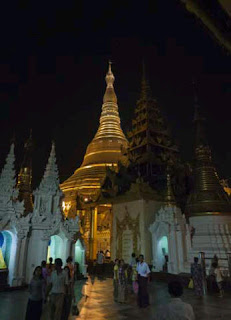 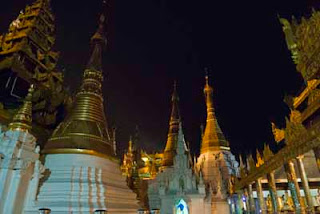 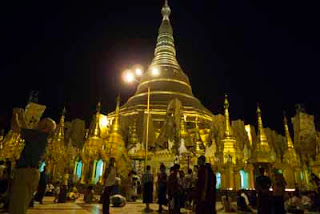 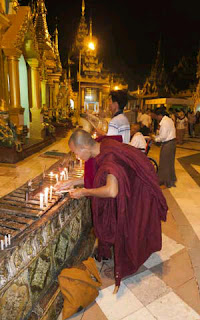 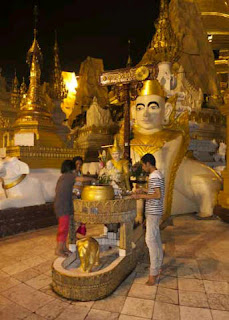 This afternoon, I and 8 other passengers landed in Yangon airport to start our 3 day exploration of Myanmar (I still prefer to call it Burma, but our politically correct guide insisted on calling it Myanmar – a good way for her not to fall out with the military government who still rule this country with a rod of iron).

Because the country virtually closed itself off to tourism for a couple of decades, and so few people have visited it since it began to open itself up again over the last couple of years, it was very difficult to know what to expect. I guess that I expected it to be more primitive and more poor than what we were confronted with on the busy streets of Yangon. There were plenty of cars on the streets, but no motorbikes (which made a massive contrast from Vietnam), so the ordinary workers have to rely on the public transport system. That meant that the buses were unbelievably full – people were absolutely crammed in and literally hanging off the sides. How the bus conductors kept a track of everyone, I'll never know.

As it was already dark, we headed straight for the dazzling Shwedigon Pagoda – a place that was such a sensory overload that it's difficult to describe. The central stupa (which is meant to contain various Buddha relics) was enormous, and covered in glittering gold that was lit up by floodlights so that it appeared to be glowing, while it was surrounded by so many other temples, Buddhas in every sort of position, and thronged by literally thousands of worshippers. With this combination of shiny bling, flashing lights, architectural splendour, and religious devotion, it was like a cross-between Las Vegas, Disneyland and St Peter's Basilica in Rome. Basically, it was like nothing else I've seen before.

In facts and figures – the central stupa was 332 feet high, is thought to be 2,500 years old, is covered with over 13,000 large plates of gold, the weather vane contains 1,100 diamonds, while on top of that is a diamond orb that contains 4,300 diamonds totalling 1,800 carats. Unbelievable glitter.

This was an almost overwhelming introduction to a country that is profoundly Buddhist and perhaps the most obviously religious country that I've ever been to. Monks in their crimson robes walking barefoot along the street are an incredibly common sight in Burma, while the huge number of temples seem to be an integral part of everyday life. Here at Shwedigon, families did their evening walk around the massive stupa, in the same way that Spanish families do their paseo around the central square, or British families do a walk around the shopping mall. Whilst plenty of people were quietly praying or lighting candles, there wasn't an atmosphere of serious religious piety here – instead, there seemed to be a really joyful atmosphere in a place where people came for fun as well as to pray.

It was strange to think that the happy-looking people all around us have been living under a repressive dictatorship, which has only just begun to loosen its grip on the country. Whether the atmosphere was this happy when Ang San Suu Kyi was still under house arrest I can't tell you, (and our guide couldn't tell us); but, it was telling that there weren't the same signs on the streets you see in other dictatorships I've been to, where a cult of the leader, or of the Party is shamelessly promoted all around on billboards. Here, the only omnipresent cult that I could see, was of Buddha – you can't look anywhere in Myanmar without seeing a statue of image of the Buddha somewhere.

This was almost too much to take in, and once we'd got to our luxurious hotel (the Governor's Residence), everyone was pretty much dumbfounded over dinner – although the fact that we'd just been told that we had to get up at 3.30am to fly to Bagan didn't help.