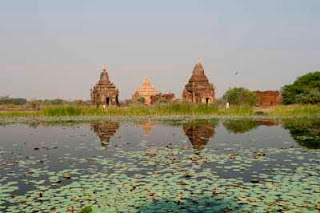 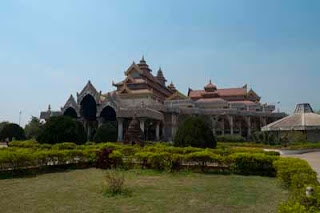 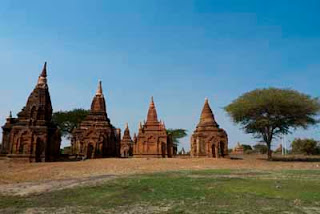 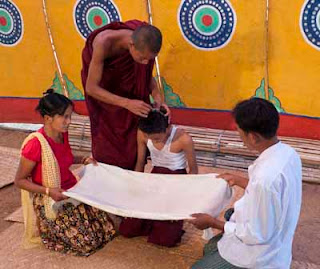 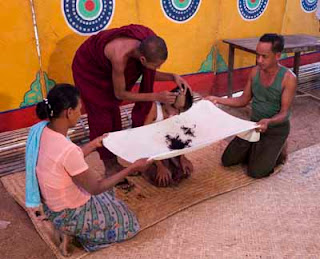 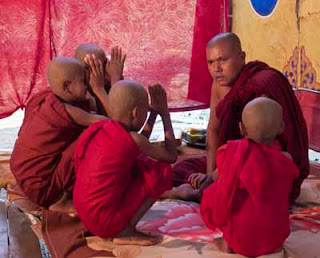 We had scheduled a much-needed morning of relaxation in our luxury villas, but for reasons best known to myself, I decided to do a trek into the temple-dotted plain beyond our hotel. Everywhere in the distance, you could see the peaks of a temple ahead of you, so I chose one and headed to it. There weren't really paths through the sandy countryside covered with thorn bushes and scrappy trees, so I just followed my nose on a winding route where I was least likely to get snagged on prickles.

Within 100 metres, it felt like I was in the middle of nowhere, nothing was moving out there on an intensely hot morning, and there were no sounds apart from the buzzing of flies around my ears, and the occasional shrieking crow. I stumbled along, crossing dried up river beds, and began to imagine the news reports of stupid English tourist lost in the desert for days – maybe I should have brought more than one bottle of water with me?

Eventually I reached my destination, although there were so many temples in the distance, I couldn't be sure that it was definitely the one I'd decided on – even though it was totally deserted and semi-ruined, it still had a well tended Buddha inside. It made you wonder, who was the person who decided to build this particular temple almost 1,000 years ago, and why? I guess we'll never know.

In the heat haze, I could just make out the Bagan Tower in the distance – thank god for this architectural monstrosity to guide me back! Eventually, I staggered back to hotel, and, like any great explorer would do, I cooled off in the huge infinity pool that I had just to myself.

Then it was time to meet up with the group again, and we headed to the enormous Archaeological Museum – they must have spent a lot of money on the museum, and even if it didn't have a lot of stunning exhibits inside, it did a good job of putting the temples into the context of the people who actually built them.

After another delicious Burmese lunch, we headed to a remote village that was really off the tourist trail – the roads were just dusty paths and the houses were all made out of wood. There was electricity, but every house had to collect its water from a central tap – little girls walked down the road with 2 huge pails of water hanging at each end of a stick (I'd have struggled to lift them).

On talking to a couple of villagers, our guide found out that we were very lucky – there was a coming-of-age ceremony going on, where a number of little boys were going to become novice monks for the first time. So, we headed to a marquee that had been put up, where a line of worried-looking boys fidgeted nervously while a few monks prepared the ceremony – the locals didn't mind us being there in an atmosphere that was partly like a First Communion, partly bar mitzvah, partly fiesta. One by one, the boys had to kneel down in front of a monk to have his head expertly dry shaved, while his proud parents caught the hair in a towel. As this was a bit of a production line, the monk only shaved about a third of the head, leaving the boy looking quite forlorn before someone else finished off his skinhead cut.

Then, the now-delighted and much-relieved boys were presented with their monk robes by the monk, and they were now invited to sit on a pedestal above the level of their parents and the ordinary villagers. It was a fascinating ceremony to watch, and an intriguing glimpse into how Buddhism has such a central role in everyday Burmese life.

Next, it was time to go to the airport to fly to Yangon, with all the usual sitting around that you expect with air travel. On arrival, we were whisked off to a lovely French restaurant (when in Burma, of course, you eat French Cuisine), where we ate in the garden and enjoyed the warm evening.