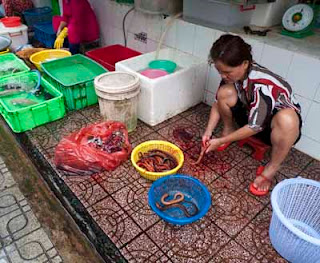 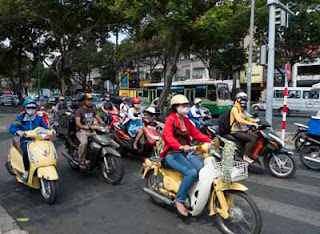 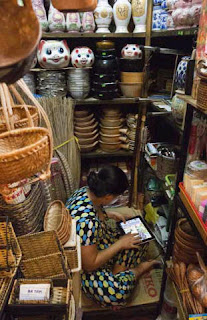 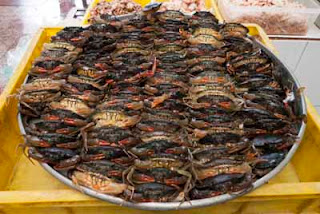 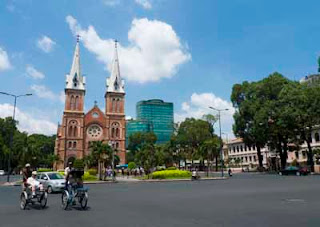 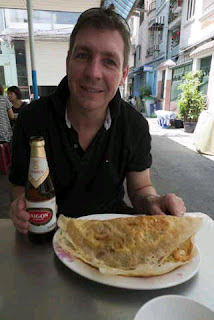 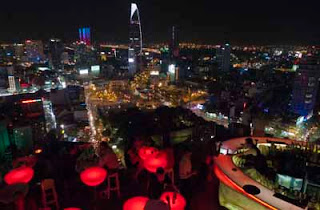 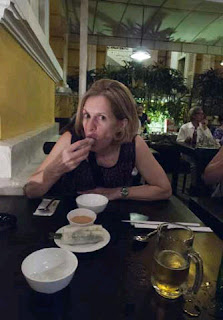 I was up early to narrate from the bridge our final approach to Ho Chi Minh City down the winding Saigon River. Even in the space of the 12 months since our last visit, the amount of new buildings in the skyline was astonishing. The city is growing at a phenomenal rate, meaning that the overcrowded roads are possibly even more gridlocked than they were last time (it didn't seem possible that they could be more crowded, but they are).

We took the Shuttle Bus into town, and headed for the Ben Than Market, which was its usual chaotic and colourful jumble of bargains, fakes and grabby vendors. I tried some half-hearted bargaining for T-shirts, but the over-inflated offer price, then the fake shock when I countered with something more realistic soon wore me down, and I ended up not buying anything.

We made the focus for our exploration one of the districts to the north of District One, where we were heading to a rough-and-ready restaurant that we'd seen recommended on the internet. On our way there, we left the colonial buildings and western stores of central HCMC behind, and made our way up sweaty, traffic-clogged streets lined with stores that were focused on the domestic market. We finally found our restaurant in a (thankfully quiet) side street, so we sat outside in the shade and tried to cool down. The restaurant specialised in a form of fried crepe that was filled with cheese, vegetables, and a choice of chicken, pork or prawns – a tasty fusion of French and Vietnamese cuisines. It was lovely, the beer was cheap, the clientele were mainly locals and the waiters were friendly – a good choice.

Next, we headed back to the centre, where Tracy had booked a hair appointment at a salon where she'd had a successful cut and colour last year. As this is a fairly lengthy process, I had a massage (nothing dodgy!), while I waited for her. By the time I came back super-relaxed, I could see that Tracy was looking a little agitated. It appeared that as they're not that used to colouring western hair, they'd added some bleach to her hair colour, so her hair was looking distinctly golden, rather than blond. In the past she's had a similar colour disaster and come out with an unwanted "Romanian Hooker" look, so she was coming increasingly close to meltdown. After a series of highly stressed ranting and troughs of depression, and three attempts to rectify the straw colour, we got something close to the colour that she wanted. Not a relaxing way to spend the afternoon.

All the time taken turning her from yellow to blond meant that we didn't have time to go back to the ship to cool off, get showered, and get changed. So, with my scruffy shorts on, and with my t-shirt stuck to my back with massage oil, we caught a taxi to one of HCMC's most upmarket bars, the rooftop "Chill" bar on the 26th floor of the AB tower. Unfortunately, we'd forgotten about the dress code there, which doesn't let people in with shorts on – but we had an ingenious solution. Tracy had changed into a dress, so I attempted to cram myself into her trousers. I just about got them up my legs but I couldn't do them up – fortunately, my T-shirt was long enough to cover the gaping flies. So there we were, in HCMC's poshest bar, surrounded by the uber-trendy nouveau riche of the city, enjoying million dollar views, with me looking like a cross-dressing tramp, with my Romanian hooker girlfriend – we got lots of admiring looks!

After this, I got back into my shorts we went to our favourite restaurant, the much more informal Quan An Ngon for some delicious food.

You always have a an experience to remember in Ho Chi Minh City!