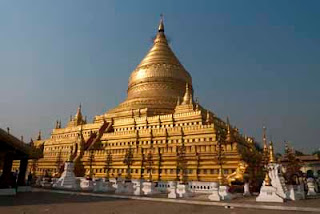 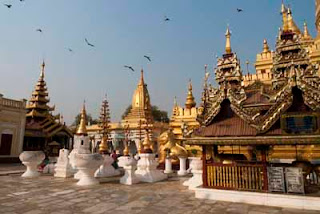 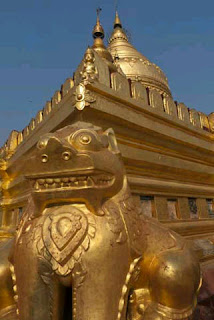 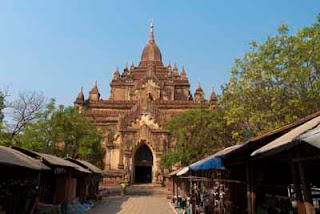 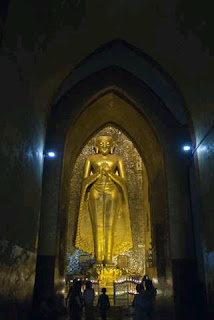 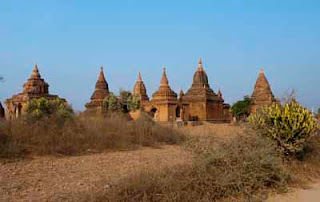 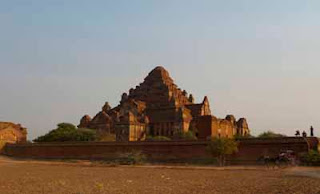 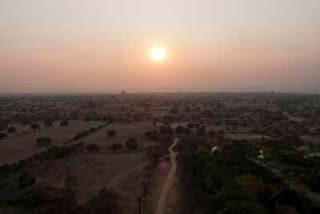 It was a painful start to the day to get up at 3.30am for our early morning flight to Bagan. Scarcely awake as we drove through the quiet streets of Yangon, those dazzling sights we saw yesterday evening felt like a wonderful dream.

We were flying to Bagan, which had been the Burma's most important city in the 11th-13th centuries, to see its incredible collection of temples and stupas. What makes Bagan so amazing is that there's nothing left of the city of 200,000 people that once stood here, apart from its array of over 3,000 brick-built temples dotted around a wide, sun-scorched dusty plain. With little in the way of vegetation, other than a few scrappy trees, these 1,000-year old temples silhouetted against the horizon, were ghostly reminders of a once-great (and obviously madly religious) civilisation.

As you drive across the plain you really can't believe how many temples there are dotted around the countryside – you're left with the questions of why so many temples were built, and why there isn't anything else here but temples? It all came about because the powerful Bagan King was converted to Theravada Buddhism, and so was desperate to show everyone how devoted to this new brand of Buddhism he was. Once he started to build temples, all his courtiers wanted to show him how devout they were too, so they built smaller ones. And then, all his successors over the following couple of centuries began a competition of who could top the architectural splendours of their predecessors. This was ostentatious religious devotion gone mad – you wonder what proportion of the kingdom's wealth went into these stupa-fying vanity projects. No wonder perhaps, that it all crumbled away to nothing.

All other buildings in the ancient city (including the royal palace) were built out of wood, and so were eventually destroyed or decayed away when the city fell from grace in the 14th century after being attacked by the Mongol hordes, and so just these brick temples are all that's left of the Bagan civilisation. Most of the temples and stupas had fallen into fairly bad disrepair by the time independence came around in 1948, and curiously enough, it's been the military dictatorship who's spent the most money on repairing them. Most dictatorships tend to ban religions, but Burma's has been actively promoting it – you wonder if Burma's brand of Buddhism, which promotes acceptance of your individual lot, is seen as a way to keep the people compliant?

We first went to the Shwezigon Pagoda, which was almost as dazzling as Yangon's Shwedigon Pagoda – an enormous golden stupa, again surrounded by so many Buddhas that you thought that you'd ended up in Buddhaland. Even after 4 hours sleep, this was enough to put a spring in our (barefoot) steps.

We then visited 2 other large temples out on the dusty plain – each one would have originally been covered in ornately-carved stucco, which has decayed over the years, leaving just the distinctive red-bricks. The people we met along the way were invariably smiling and welcoming, while the vendors were normally happy to take no for an answer, and didn't hassle us – now that tourism is taking off, it will be interesting to see if it stays that way.

For lunch, we headed to a fairly incongruous addition to Bagan's evocative skyline, a 10-storey viewing tower that at least gave us spectacular views over the temple-strewn Bagan plain, and across to the Irrawady River in the distance. The building wasn't pretty, but the panorama in front of us as we ate at the top of the tower was amazing.

At last, it was time for a brief rest, and we checked in to our hotel at the bottom of the tower, the Aureum Palace Hotel, whose enormous guest villas and infinity pool with a backdrop of temples lived up to its palatial name, even if the electricity supply was a little intermittent.

Just when I was beginning to luxuriate in these gorgeous surroundings, it was time to hit the road again, as we went on a visit to a lacquer-ware workshop, and then took an evocative horse and carriage ride along the bumpy dirt tracks through little villages and past yet more temples, before we ended up at the pyramidal-shaped Dhammayangyi Temple – another huge complex that was a monument to one king's attempts to outdo everyone else's architectural efforts.

As the sun went down on another unbelievable day, we went up that ugly tower again to get the best view of Bagan's famous sunset. As the sky turned pink, the dark silhouettes of the temples looked more mysterious than ever. What a day!