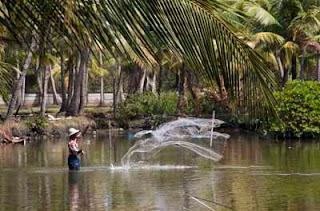 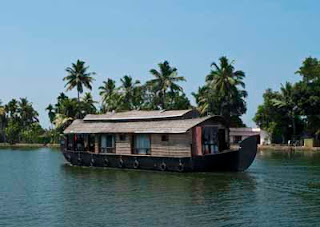 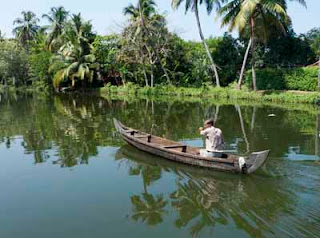 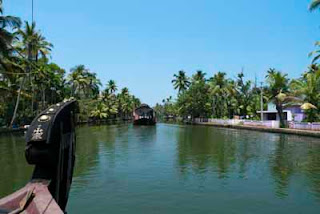 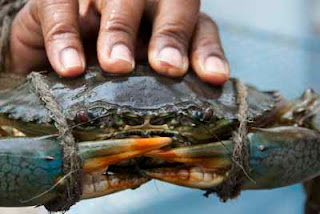 Today it was an early start to take the 2-hour drive south of Cochin to get to Alleppey where we were taking a boat trip on Kerala's famous backwaters. Even though it was a Sunday, the driver was in a constant battle with the traffic, overtaking cars on the wrong side of the road, honking his horn constantly, and being overtaken as he was overtaking – 3 cars going the same way side-by-side on a single carriageway road, with a car in the not too far distance coming towards us.

Somehow we got to the backwaters in one piece, and immediately we were transported to an utterly different world, where peace and tranquillity reigned. We climbed onto our luxurious houseboat, and began our glide down these beautifully quiet waters. As we chugged along serenely, the peace was only broken by bird calls, or the noise of people washing their clothes in the water, heartily slapping down the soapy clothes onto a rock and bashing the dirt out of it.

Of course, there were quite a few other houseboats sailing along too, but most of what we saw were ordinary people in canoes, the odd ferry boat passing us by, or families walking to church along the bankside. It seemed an utterly idyllic place to live, although there were very few amenities here – people washed themselves and their clothes in the waters, and with no roads, they had to take to canoes to get about.

It was all so utterly tranquil that people took it in turns to fall asleep, as they relaxed on their easy chairs and took in the sights. I think that three or four days of this would make for the most relaxing holiday in the world.

After a couple of hours of the most chilled out sailing I've ever done, we headed to one of Kerala's beach resorts for lunch. Kerala's not as famous as Goa for its beaches, but this one was pretty beautiful, even if it was way too hot to sit out on the burning sands. Instead, we sheltered in the shade and had our choice of delicious curries and local specialities – delicious.

Our ride back to the ship was marginally less manic than the ride back, and it was time to chill down my core temperature in the air-conditioning, before heading out again for the evening. From the ship, we walked to the upscale Taj Malabar hotel on the tip of Willingdon Island, for a sundowner. With the sun setting over the sea, the evening views were beautiful, the beer was cool and refreshing, and the hungry mosquitoes had a feast on our blood – there is always a price to pay for paradise.

In spite of the bites, we decided to stay for a curry, which was one of the best I've ever had - over the course of the past 2 weeks, I've had at least one curry either on board or ashore every single day, so I'm becoming quite an expert.

Incredible India has lived up to its title yet again – can't wait to come back this time next year.