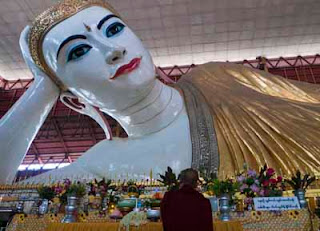 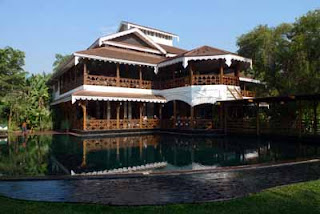 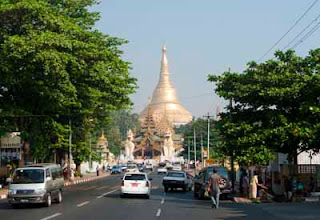 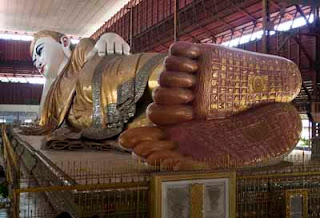 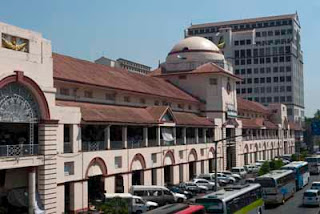 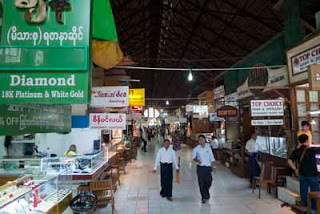 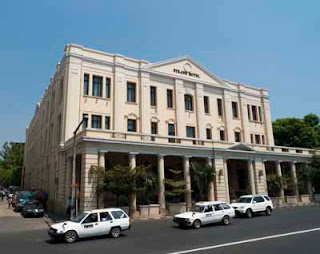 We'd driven through Rangoon three times at night time, so it was interesting to finally see what the city was really like. It doesn't have quite the same chaotic atmosphere or vertical skyline of many of the other South East Asian capitals, but the traffic jams weren't too far behind those of Saigon or Bangkok.

We headed across town to the Chauk Htat Gyi Pagoda to see its huge reclining Buddha. On the way, we got glimpses of the enormous Shwedigan Pagoda, which dominates the skyline, and also saw lines of Buddhist monks traipsing along the street going for their free monk-feeding sessions.

Once we made it to the Pagoda, we were confronted with the third largest reclining Buddha in the world – 33 metres long, with a contented 3-metre wide smile to cheer us up. The temple was the usual mixture of devout worship and just general relaxed wandering and chatting by the locals – again, the atmosphere here was not one you'd expect to find of people living under an oppressive military dictatorship.

Next, we went to see Rangoon life that didn't all revolve around religion, so we headed for the lively Scott's Market – Rangoon's biggest market. You could tell that Rangoon was fairly new to the tourist trail, because here, there weren't the lines of knock-offs you find elsewhere in the region, and the traders weren't at all pushy in trying to entice you to their stall. You could negotiate for a price, but they were very happy for you to walk away if you couldn't come to an agreement.

I also crossed the road and headed to the food market, which was a locals-only affair – there didn't seem to be the extremes of poverty that you can find in places like Thailand and India, nor were mobile phones particularly prevalent either.

After the market, on the way to lunch, we drove around the old colonial centre of Rangoon – this must have been a fairly grand place once, and I'm sure it will be again if capitalism can take a hold of these big colonial set-pieces.

All too soon, our Burmese odyssey was coming to an end. It was an intriguing place where we were just scratching the surface. I still don't know how much the Military Government intrudes into everyday life here – our guide (rather sensibly) was far too guarded to give too much away. What we did learn, was just how religious these people are, and what fabulous sights there are to be seen here.

I can't wait to get back to Burma for three more days on next year's world cruise.