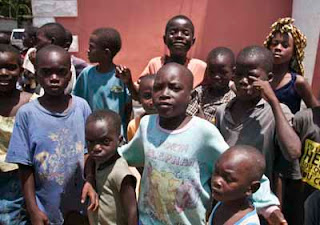 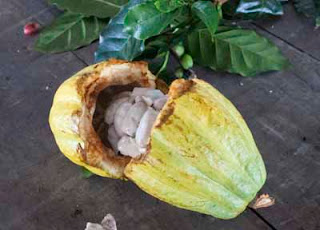 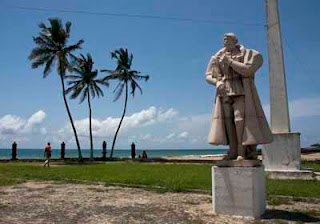 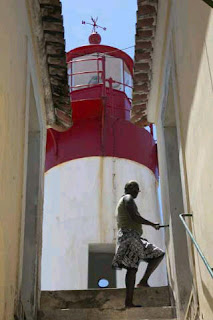 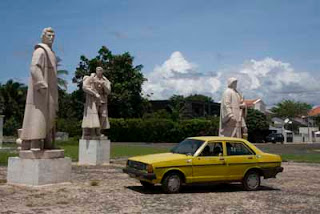 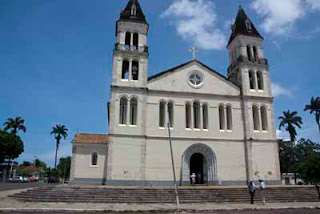 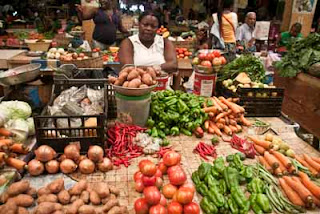 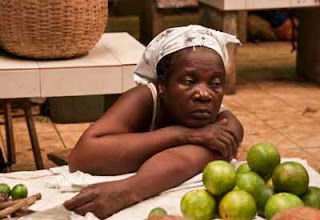 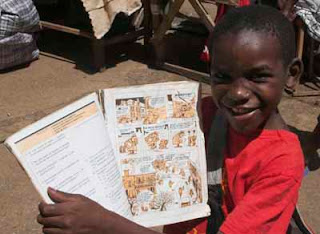 For a place that's as off the beaten track as the West African island of Sao Tome, it's strange to think that it's at the Centre of the World – geographically speaking at least. Because, this is the nearest land mass to the point where the Meridian and the Equator intersect – an equatorial setting which always makes the island incredibly hot and sticky (even if today's heat wasn't quite as overwhelmingly hot as the last time as we were there).

Besides its (little known about) geographical claim to fame, Sao Tome is chiefly famous for once being the biggest producer of cocoa in the world – a time when Cadbury's and Rowntrees would buy up the island's precious production of cocoa beans for their chocolate factories in England. Sadly, that economic peak was about 100 years ago, and the island's been in decline for most of its time since then – a trend that was increased by the ruinous policies of its post-independence socialist government, which nationalised the cocoa plantations and let them slowly fall apart.

I joined a trip to explore the island's cocoa-producing past, and see what's left of this once-thriving industry – the short answer was, not much. We travelled into the lush green mountains behind Sao Tome town, and bounced our way along pot-holed roads past crumbling villages and dilapidated roadside shacks. On an island with little infrastructure where only 20% of the population have access to fresh water in their homes, you could see the water taps where people came to fill up their water bottles, and wash their clothes. But, although they were obviously materially poor, people appeared to be happy and well fed, and most people gave us a cheery wave and an "ola" as we passed – apart from the odd schoolboy with attitude who sent a middle finger our way.

We bounced our way up to the Monte Cafe Plantation, which was once one of the largest cocoa and coffee plantations on the island. It was pretty run down, but it was still a functioning plantation – although, we were told that the harvest had been processed last month, so there wasn't much activity going on. We passed through cavernous processing sheds which once would have been hives of activity where hundreds of contract workers would have beavered away, but were now decaying away gracefully.

Instead of workers, the plantation seemed to be an open-air playground for lots of kids, some with shoes others without. Initially, they were a little stand-offish, but then the cheeky ones asked for our water bottles (but not for cash), and after a while, they just wanted to interact with us. One little boy, in a grubby ill-fitting T-shirt took a real liking to me, and led me around by the hand showing me plants and fruits that were growing here – seeing as neither of us spoke the other's language, we didn't learn much from each other, but it was nice to have some genuine interaction, without it turning into a sales pitch or begging exercise.

From here, the road got really bumpy, as we made our way further up the mountains, up to the abandoned Bombaim Plantation – its once-grand buildings now falling apart, and its fields now untended. It was a slightly depressing summary of the country – charmingly dilapidated and not meeting its potential.

Our excellent guide told us that Sao Tome's one hope for the future was that oil had been discovered in the seas off its coast, and it was hoped that production would start in 2016. Sadly, the Nigerians have muscled their way in on the contracts, so no pipelines will head Sao Tome's way, and much of the advances paid to Sao Tome had already been squandered by corrupt politicians and businessmen. The guide said that he actually hoped that oil is never struck, because it made him fear for the future of his country.

Sao Tome's people have a long history of being exploited – let's hope that history doesn't repeat itself, because they deserve better.