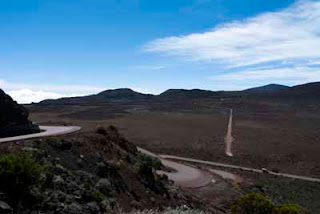 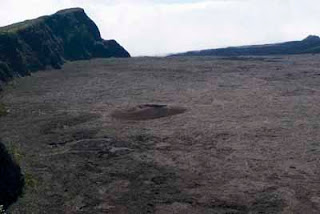 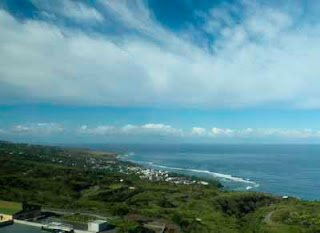 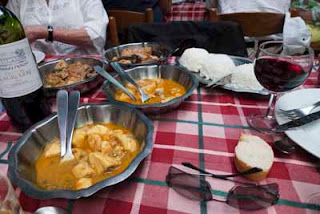 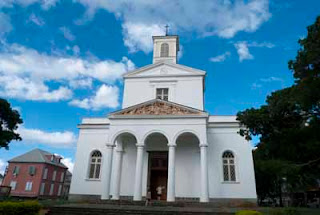 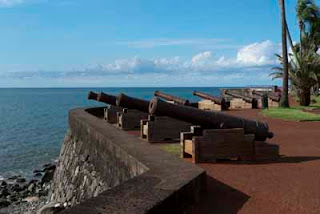 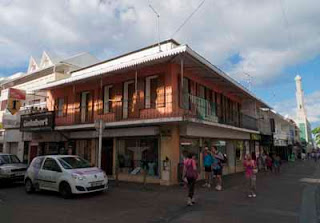 We may be sailing across the Indian Ocean towards Africa, but today we arrived at a little piece of Europe, or at least a little piece of the European Union, as we called in at the volcanic island of Reunion. The island has been French ever since they settled it in the 17th century; and, even though the majority of its population are the descendants of the African slaves brought over by the French to work on the island's sugar plantations, the place very much has a feeling of France.

The first world infrastructure, the food, the language, and the beaches easily makes you think that you could be in the South of France; but, what makes Reunion very different from mainland France, is its spectacular volcanic scenery – lush green peaks, barren craters, and boiling lava fields that could easily be a double for Hawaii.

I joined the ship's tour to explore the volcanic centre of the island, passing from the tropical coastline, up into alpine scenery that reminded me of Switzerland, passing spectacular sheer-sided gorges like something out Jurassic Park, into bleak black sand fields that looked like a lunar landscape – it's the range and variety of landscapes on offer here that's the most remarkable thing about Reunion. In fact, the landscapes were much more beautiful than most people had expected (even though they'd already seen a fascinating lecture on the island from the ship's Destination Lecturer).

As we climbed from the hot coast into the rarefied atmosphere of the mountains, it was strange to think that we were feeling the first cool, non-tropical air for the first time since we'd been in the South of New Zealand, two months ago.

Finally we arrived at the breathtakingly massive crater of the Piton de la Fournaise, the Peak of the Furnace, a windswept, elemental place which left you in awe of the power of nature. This is one of the most active volcanoes in the world, which was slightly worrying, but fortunately, the lava flows always move southwards, in the opposite direction to our approach.

On our way down from the Peak, we called in at a wonderful rustic mountain restaurant, where we ate some delicious French food, of course, washed down by some tasty French wine. Then, we headed down to the island's capital, the chic town of St Denis, which had all the grand architecture and shopping streets that you'd expect of a busy French provincial town.

This was such a lovely day on a fabulous island that will surely become as popular as its near neighbour, Mauritius, once more people have heard of it – it's not often that you get to experience elements of Africa, the Cote d'Azur, the Alps, the Moon and Hawaii all in one day.