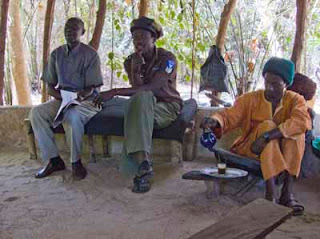 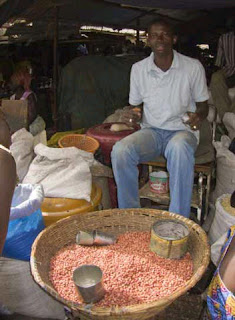 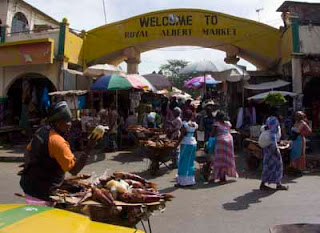 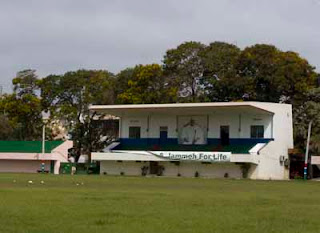 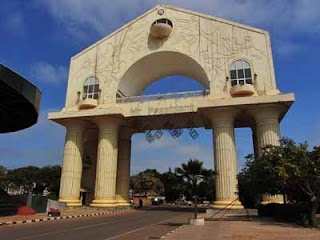 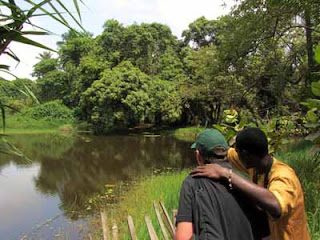 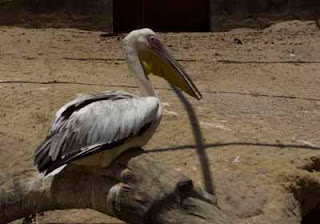 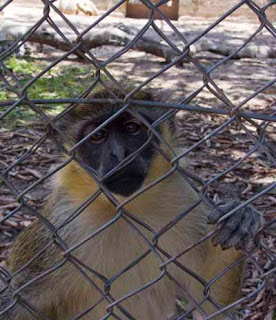 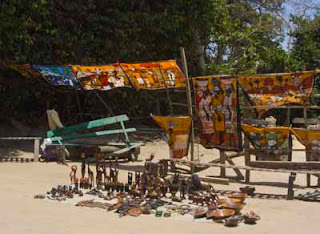 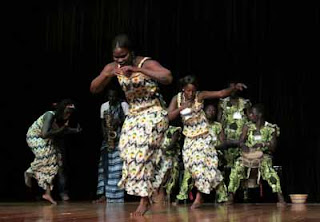 Most people onboard have been taken a little aback by the levels of grime, poverty and aggression towards camera-toting tourists in our previous West African ports, so (having set their expectations pretty low), they were mostly pleasantly surprised by The Gambia, and its slightly scruffy capital Banjul. The people we encountered in the market were generally pretty friendly (as long as people asked if they could take their photo first) – probably the result of decades of exposure to western tourism.

A few people that we met in the frenetic market were initially a bit grumpy, but with a bit of interaction they quickly cheered up – it was quite refreshing. Maybe it was because of this lighter atmosphere in town, but the passengers generally felt more relaxed and most of them have come away with a much more favourable impression of Banjul as opposed to more uptight Takoradi and Limbe.

Plenty of us had a "bumster" attach themselves to us – these are professional hasslers and hustlers who appoint themselves as your guide for the day. Fortunately, most of them would eventually take no for an answer, and they weren't threatening. So, we explored the market in relative peace, jostling with the crowds, marvelling at the incredibly colourful clothes of the elegant women, trying not to breathe at the pungent fish market, and trying to ignore the skinned cows heads for sale at the equally stinky meat market.

After the market, we walked around the town a little, trying to see if there was any colonial architecture left from British times (not much - this was one of the more unsuccessful of the British colonies), under the constant gaze of the ubiquitous posters extolling the virtues of President Jammeh, who has ruled the country since he took power in a coup in 1994. To add to the psychological hold he has over the country, on our way out of town, we had to drive round the country's tallest building (not hard in a place which doesn't have many buildings over 4-storeys) – the Arch 22 – a less-than-subtle commemorative arch to his coup, which only he is allowed to drive under.

We were heading out of town, because we'd hired a taxi to take us to the Abuko Nature Reserve, about 40 minutes out of town – without too much negotiating, we got him to agree to take us there, wait for us for a couple of hours and drive us back for €30. Our taxi was a Mercedes, but it was at least 30 years old and fairly beaten up and cronky – every time we wanted to wind the window up or down, he only had one handle for all the windows, so we had to pass it around between us.

However, we did make it in one piece to the reserve, where we picked up a local guide who we were initially very sceptical of, but who actually turned out to be excellent. The reserve wasn't huge, but it had a lot of birdlife, 3 different types of monkeys, and some crocodiles who surfaced from its lake as if by remote control, as soon as we turned up. The guide had amazing eyesight – often he'd peer over to a tree in the far distance and point out a bird that we were utterly incapable of seeing. Just when we thought he was making it up, the kingfisher, hawk or whatever it was would move, and we'd be able to see that he knew what he was talking about.

We did a very enjoyable 3 mile long trail around the park, hearing about the wildlife, and about life in The Gambia, stopping at a mini zoo which had some menacing-looking hyenas sprawled out in the heat of the day, some very frisky baboons, and an over-excited vervet monkey who'd been put "in prison" for ripping the hair out of a poor tourist's head. We never had it confirmed whether our guide was joking when he said that the lion that used to live there had escaped.

At the end of a hot, but fun afternoon of exploring, our guide led us over the road into the bush where we came across a "bar" ran by a man calling himself "Jungleman". It was basically a covered over clearing that must have been illegal, but which was a nice spot to have a miraculously cold beer and hear Jungleman's musings on life.

So, The Gambia may not be the cleanest or most organised place in the world, but the people were friendly, they appreciated the fact that tourists preferred it if you were nice to them, and the wildlife and nature are good fun to explore. This was a better day than most people had expected.