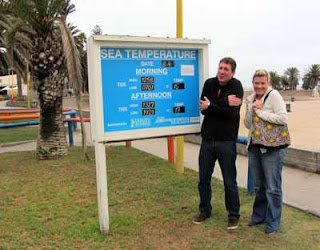 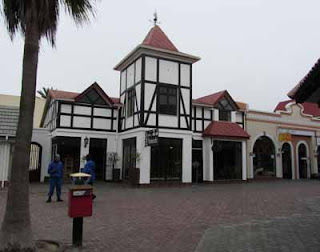 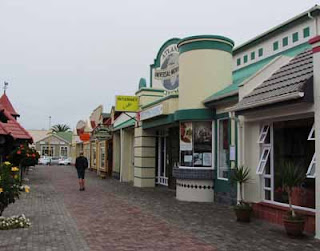 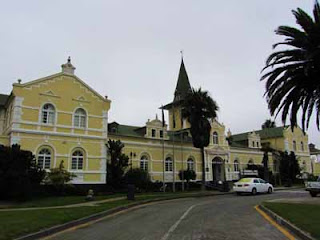 Today we were met off the ship by our lovely local friend Anita, who drove us up the coast to the German colonial town of Swakopmund. At the end of the 19th century, the Germans had high hopes for their new colony in South West Africa, and they invested a lot of money in building a new town on the edge of the desert at Swakopmund.

As a result, there's a lot of fancy German architecture in a town of neat, wide streets, German bakeries and delicatessens. And, even though the German African Empire lasted no more than 30 years before their defeat in World War One, much of the town's population is still German. In fact, the town's become a holiday resort and retirement destination for much of Namibia's white population, so it retains its mainly white, middle class atmosphere.

However, by April, Namibia's holiday season is pretty much over, which gave the town a sleepy, out-of-season atmosphere – in fact, when we got back on the ship, most people who'd explored either Walvis Bay or Swakopmund were asking, "where have all the people gone".

We stopped for a hearty breakfast and then did a walk around the quaint streets, before stopping off for a little walk along the wild coastline; but, sightseeing wasn't really our plan – it was mainly to spend our time catching up and gossiping, something that we achieved very well.

So, this was a gentle start to West Africa – it's going to get a lot hotter, a lot busier, and a lot more chaotic over the next few days.