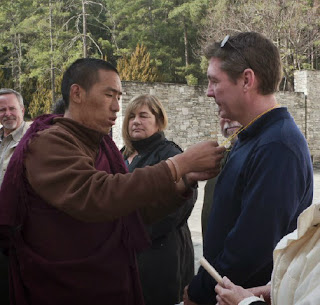 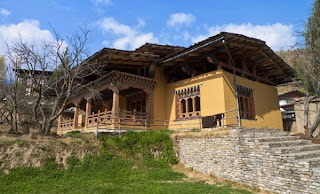 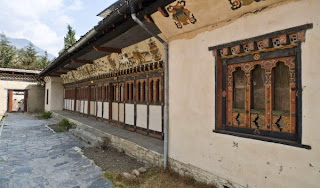 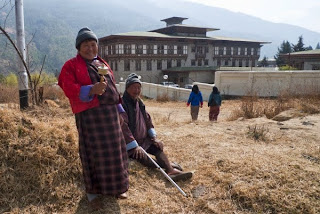 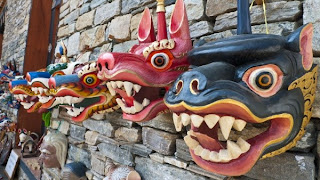 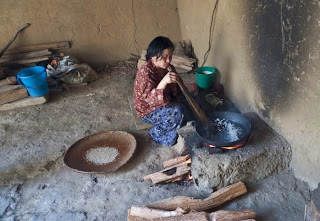 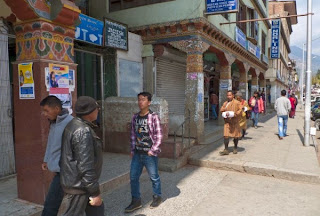 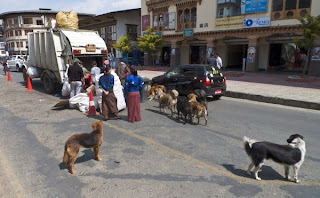 Thankfully, no-one seems to be feeling the effects of the altitude (we're above 2,000 metres here), so that meant that we could explore the capital Thimpu in the morning. We first went to the Folk Heritage Museum, which as you can imagine for an isolated and tiny country of only 600,000 people wasn't exactly packed with stuff, but it had an interesting re-creation of a traditional Bhutanese house, where we could appreciate the simple and rugged lifestyles lived here until relatively recently. Since the 1970s, roads have been built and electricity introduced, but those harsh winters still must be as difficult as ever.

We then went for a wander through downtown Thimpu, a busy place with a surprising amount of traffic congestion – not helped perhaps by the fact that there isn't a single traffic light in the country. The people were wonderfully friendly (a defining characteristic of the Bhutanese people), and the shops were well-stocked with most things you'd need (most of it imported from India). One thing that Thimpu does appear to be suffering from though, is a large number of stray dogs on the street. They're not particularly a nuisance (they're not aggressive in the slightest), but they follow around the garbage trucks all day long hoping to get something to eat, and they bark all night, much to the annoyance of the locals.

From here, we took the long bumpy road to Paro, which was going to be our base for the next few days. The resort there is equally gorgeous, but the road leading up to it was being widened, which meant that we were virtually off-roading for about 45 minutes, passing by teams of Indian roadworkers (mainly women, some with babies strapped to their back), doing the hard manual labour of hacking out the road from the mountainside. However, once we were up to our mountaintop resort, it was in a beautiful alpine location, fresh air in abundance and cool streams rushing past.

After lunch, we braved the "road" down to Paro again, to visit its impressive Dzong (fortress). This one was even more impressive than Thimpu's, its tall walls and towers built to protect the valley from Tibetan attacks. Most of Bhutan's Dzongs have been converted into monasteries, so inside we saw lots of monks wrapped up well in their saffron robes, and we visited their colourfully decorated temples, to get an idea of just how central Buddhism is to life here in Bhutan.

From the castle, it was a lovely walk back down into town at the base of the valley, everyone we passed saying "hello" to us. Actually, it surprised me how many people spoke English – English has become the main language of education here – to such an extent that when you listen to the locals talking in their language, Dzongka, it's amusingly interspersed with English words and phrases. In fact, the government is becoming worried that "Dzonglish" is taking over, so they're now making efforts to preserving the purity of the national language.

After this, we explored the souvenir shops of the pretty town of Paro – unsurprisingly, given the large budgets of their tourists, everything is on the pricey side here. Finally, we bounced our way back up to the resort, and had yet another lovely evening meal (the food has been excellent), before everyone retired early to bed, to prepare ourselves for the main event tomorrow – the epic hike up to the Tiger's Nest.