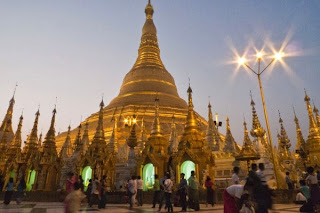 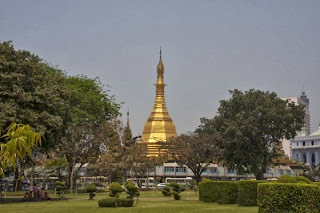 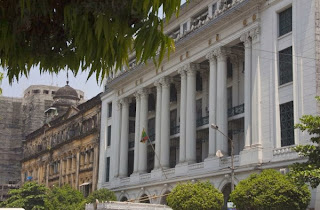 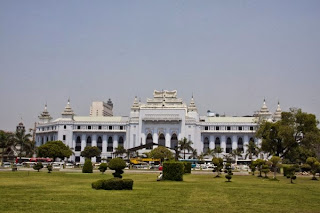 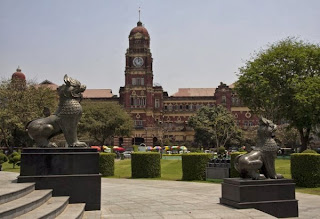 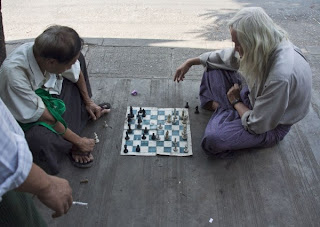 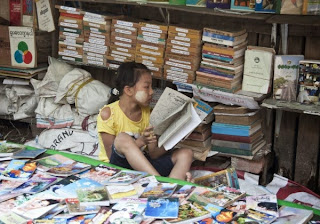 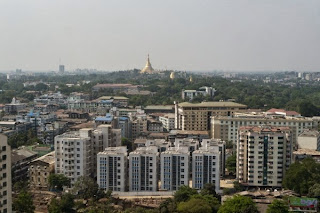 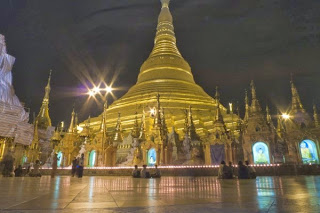 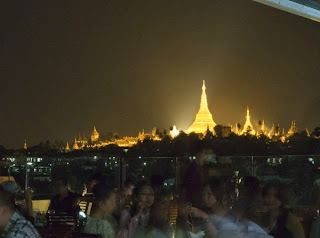 Rangoon is increasingly in gridlock – the economy has been booming since the Generals loosened their grip on society, and the nation ceased being a pariah on the world stage, which means plenty more cars on the roads (on a road system in need of serious investment). However, the Generals haven't been willing to repeal the ban on motorbikes on the streets of Rangoon, which would surely alleviate some of the congestion. The result is that the Shuttle Bus ride in from the port into the centre of town, which used to take 45 minutes, can now easily take double that time. Which is why we decided to book a hotel in the centre of Rangoon for the night, to avoid wasting three hours on a Shuttle Bus – an excellent decision.

We caught the first Shuttle Bus into town, and even though it's a slow and bumpy ride, there's always plenty to see on the way – even in Rangoon's small satellite towns, there are some unfeasibly large and OTT temples, while life is lived out on the street here, loads of people in traditional dress walking to market, to temple or to work.

Once we'd finally reached Rangoon, we walked down its network of crumbling streets in the colonial district, passing once-magnificent neo-classical buildings with peeling plasterwork and dilapidated facades. This place must have been very impressive in the early 20th century, but decades of neglect since the generals took over, have left it in serious need of a facelift. As if to prove the sorry state of the infrastructure, I managed to semi-fall down a hole in the pavement (having carefully warned the passengers in my lectures about the dangers of tripping on the crumbling pavements!) - I cut my hand and bruised various parts of my body, and most importantly, bruised my ego.

The damage was superficial, so I dusted myself down, and we headed down to the Sule Pagoda, Rangoon's second-most important Pagoda, sitting rather incongruously in the middle of a busy roundabout. However, the peaceful atmosphere inside made for a marked contrast with the frenetic streets outside, as we tip-toed our way barefoot over the roasting hot floor.

Across from the Pagoda, we went to find some more shade in Rangoon's main square (it was well over 100F/40C) – the architecture surrounding us, summed up Rangoon's history. The glittering spire of the Pagoda competed with the spires of a Christian church; the Indian Raj style of the law courts, looked across at the 1920s Neo-classical/Burmese mish-mash of the Town Hall; while the tall obelisk of the Independence Monument proclaimed Burma's new start after the British, and a couple of new skyscrapers (hopefully) proclaimed Burma's new start after the Generals.

We then went to get Tracy's camera cleaned – fortunately, Rangoon is a city where all the shops selling a particular item or service all gather together in the same street, so we had plenty of choice. In spite of a few qualms about leaving the expensive camera with people we'd never met, the service was quick, efficient and cheap. Rangoon does appear to be developing a harder edge now that capitalism is taking off, but people generally appear to be pretty honest.

We went for lunch at a restaurant on the 21st story of one of Rangoon's tallest buildings – the food wasn't up to much, but it was air-conditioned, and the views were magnificent.
Judging by the state of its buildings, Rangoon has clearly seen better days; but, also judging by the construction work and the vibrancy on the streets, Rangoon clearly has better days to come.

From here, we walked up to the Scott Market, which has also developed a slightly harder commercial edge in the last 12 months and prices have definitely gone up, but it was still a more relaxed atmosphere than the tourist markets of Vietnam and Thailand.

By now, we were in need of a shower, so we headed for our hotel, which was basic, but clean and efficient. Most importantly, it was close by to Rangoon's star attraction, the Shwedigon Pagoda, where we headed for sunset. This enormous, shimmering Pagoda is covered in something like 60 tonnes of gold and topped with huge glittering diamonds, so as the sun goes down, the floodlights come on, and the worshippers light their candles, it assumes a glowing, magical magnificence. I waxed lyrical about Shwedigon in my blog last year (March 4th 2013), so I won't go on about it now, but suffice it to say, it was a joyous, sensory overload walking around this amazing spectacle.

By now, we were hungry, so we headed over to the excellent Pandonmar Restaurant for a lovely, tasty, and remarkably good value meal in the garden of an old colonial villa, before heading for a few nightcaps at the Vista Bar. We'd expected this rooftop bar to be on top of a 30-storey building, but it was only on the 4th floor (seeing as there was no lift, maybe that wasn't a bad thing!). But, what it lacked in height, it more than made up for with the views – the bar certainly lived up to its name with some amazing vistas of the Shwedigon, positively glowing against the dark night sky. It was like the whole thing was on fire.