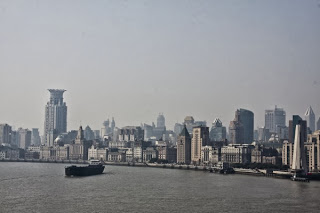 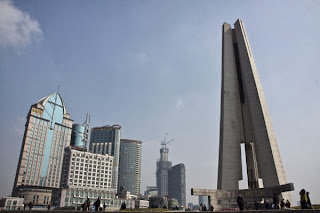 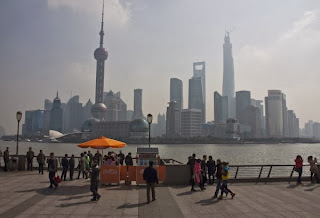 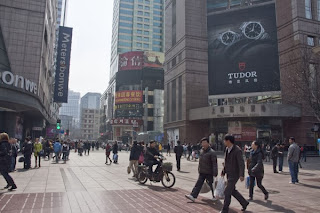 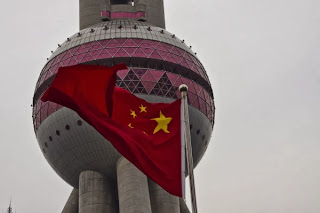 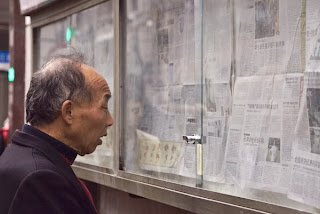 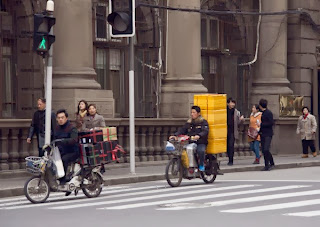 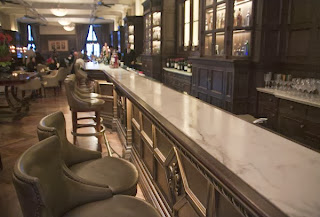 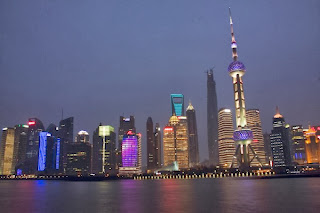 Seeing as yesterday had been a virtual photographic washout in terms of mist and rain, today, we decided to re-trace our steps to get some better pictures of Shanghai's remarkable skyline. Whilst it was a sunny, cloudless day, it didn't mean that it was crystal clear – the city's constant fog/smog meant that there was always a haze in the sky, and blue skies were almost non-existent.

We walked along the Bund, marvelling at the low-rise grand colonial set-pieces of a city that otherwise presents an almost overwhelmingly high-rise modern face, before embarking on a trek up the incredibly busy Nanjing Lu – Shanghai's main shopping drag. Being a Sunday, the street was as busy as I've ever encountered it – you were being jostled and barged non-stop by the sea of humanity trooping the other way, constantly having to reject offers of "copy watch" and "copy bags" from the persistent street hawkers, and constantly having to block out the incessant hacking and spitting of our fellow shoppers. If you don't like crowded streets and busy streets, then Shanghai on a Sunday is definitely not for you.

Having satiated our appetite for exotic Chinese food and sautéed panda toenail clippings with last night's meal, I'm ashamed to say that for lunch, we were rather lame and headed to Costa Coffee for a ham and cheese toastie. After a bit of shopping, we headed back to Pudong, where its space-age skyline was looking much better; and then, from the ultra-modern, we went back to Shanghai's past by visiting the old Shanghai Club, which has undergone a multi-million yuan restoration project to turn itself into the Waldorf Astoria.

This was once one of the most exclusive clubs in colonial Shanghai, yet nowadays they were happy to let a couple of scruffy oiks like us in without a question. We set ourselves up in the fabled Long Bar, and imagined ourselves in Shanghai's colonial heyday, when people like Noel Coward were living it up here in those "anything goes" days. The drinks are as expensive as ever; but one advantage it has over the old Long Bar, is that it now has super-fast wifi, so we availed ourselves of its fast connection while revelling in its old world opulence.

Today's Shanghai is still an intoxicating blend of the old and modern.