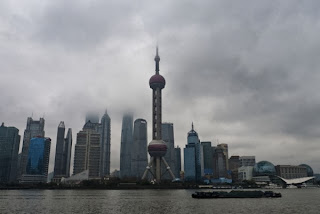 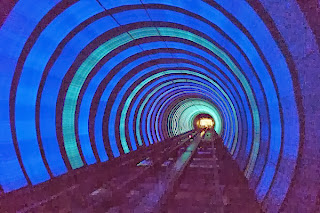 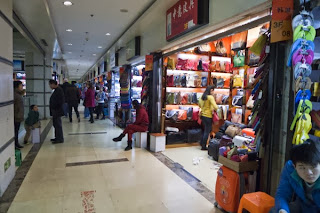 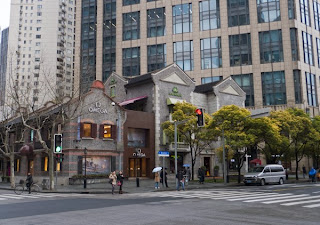 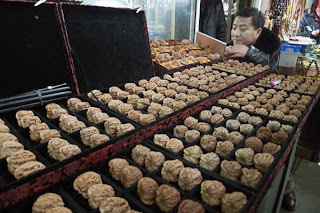 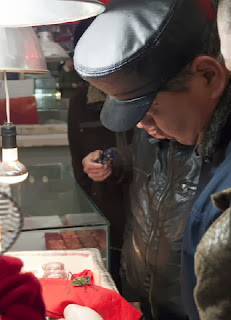 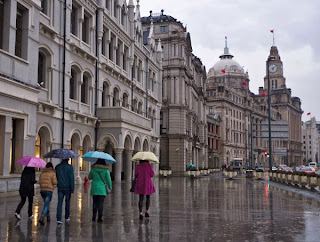 It's an obvious thing to say that modern China has become increasingly capitalist and consumerist (at times it seems even more so than the west), but today really confirmed that the ultra-modern city of Shanghai is right at the head of it. So, seeing as we were in Shanghai, we decided to do as the Shanghainese do, and concentrate on what seem to be the top activities in town – eating and shopping. Plus, it was a bone-shudderingly cold day today, so being inside a mall or a restaurant seemed like a better alternative to freezing ourselves outside.

We started off the day doing a Shanghai experience that we've resisted on many previous visits, by taking the much advertised "Tourist Tunnel" under the river, crossing from the Bund to Pudong. The reason that we've rejected the Tunnel in the past was that it was; a) too expensive (almost 20 times the price of getting the much faster metro); and, b) it's reputation was that it was a bit too kitsch. The tunnel stayed true to its reputation – it was vastly overpriced for what it offered (a slow-speed trip in a kind of tram that looked like a portaloo), and the commentary and overbearing light show were trying to give the impression that it was a high-octane experience, rather than a turgid trundle in a glorified shopping trolley.

Nevertheless, we were safely delivered to the other side of the river to Pudong, to see Shanghai's ultra-modern skyline at close hand. Every time we come back to the city, it seems like the skyline couldn't get any taller or any more space-age – and each time, it beats what was there before. Since our last visit in 2012, the city has become home to the world's second tallest building – the Shanghai Tower – which, at 120-storeys tall, had its head in the clouds for most of the time. Even though it still isn't completed, it towers over the World Financial Center and the Jinmao Tower, both of whom were once in the list of the world's Top 5 tallest buildings, but are now dropping down the rankings.

From here, we caught the metro back across the river (at a cost of 30p this time), to visit one of Shanghai's most famous fake markets, on Nanjing Road West. In spite of it being a well-established 4-storey emporium of stalls, there was still a relatively seedy feel to the place, as we were accosted by every grabby sales person attempting to get us to buy their fake DVD, fake scarf, fake bag, fake shoe and any other item that could possibly be ripped off. Once you'd done some hard bargaining, the prices were so ridiculously low that you can only imagine that whatever you bought would fall apart as soon as you got it home – but, you can't expect much if you're paying next to nothing. Even when we stopped for a beer in the bar in the mall, you half-expected the Heineken to be a copy.

After this, as the conditions outside got steadily more arctic, we stumbled across a very bizarre market – it was mainly selling decorative walnuts (which appear to be highly prized if you can get two of them looking very similar), and lots of live animals. In amongst the puppies, kittens and birds (half way round, we suddenly remembered the issue of bird flu and tried not to breathe in if at all possible), there were loads of stalls selling enormous chirping crickets. Why anyone would want to buy an ugly locust almost the size of your hand, I don't know, but there seemed to be plenty of buyers.

By now we were frozen, so we headed back to the ship for a hot bath to thaw out, before heading out with some friends for a meal in Xintiandi in the old French Concession. We'd selected a Hunan restaurant from an internet recommendation, and were feeling slightly guilty when we opened the menu and found that it was full of the most bizarre dishes imaginable – donkey hoof, pig's trotter, pig's ears, braised bullfrogs, deer sinew, pork stomach, duck's tongues, etc. If it could have offered a kangaroo's nether regions, I think it would have. Somehow we found enough dishes to keep us satisfied, and surprisingly enough, they turned out to be delicious – maybe the ridiculous amounts of chillies lathered over every single dish had dulled our taste buds.

As ever, Shanghai had proved itself to be an entertaining mix of the over-the-top, the fake, the weird, and the alluring – but, as ever, it was fun.