March 18th – Hiking Up To The Tiger’s Nest 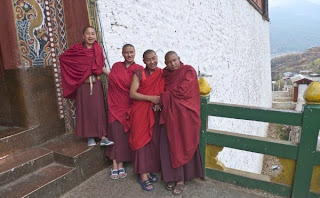 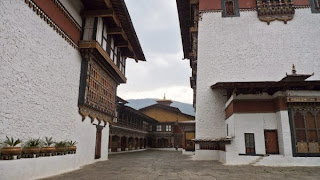 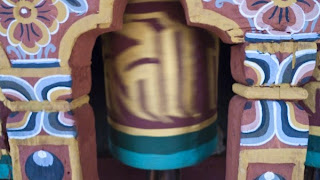 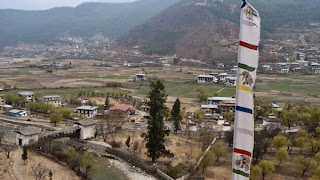 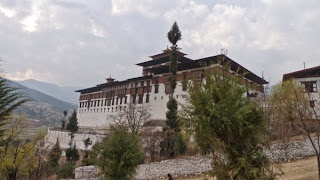 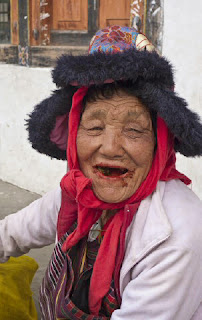 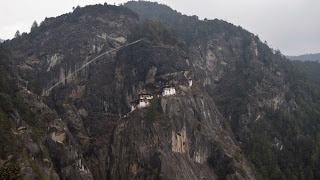 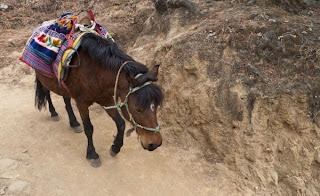 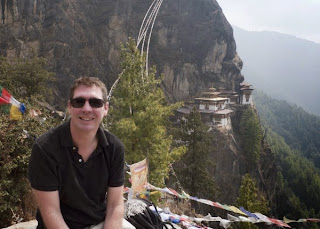 Whenever you see a photo promoting Bhutan, almost invariably it's of the iconic Tiger's Nest, a spectacular monastery perched improbably on the side of a sheer mountain. It looks more like it's from a film set rather than from real life, but our mission today was to climb right up to it, to confirm that it looks as good as its reputation.

From the resort, we drove down the valley, and started to climb up towards the Tiger's Nest. Unfortunately, the road ran out before we'd made much progress up towards the monastery, so we were dropped off, and we prepared to do the rest on foot. We would need to climb 600 metres in altitude, although looking up at it from the bottom, it seemed even more than that. We were told that it would take about 2 and a half hours to trek up, and about an hour and a half to come back down again.

Legend has it that the guru who founded the monastery in the 7th century was taken up there by a flying tiger; but, sadly, for us tourists, we didn't have such luxuries. There were ponies on hand that tourists can take a ride on about two-thirds of the way up (but not down, because it's so steep), but our guides strongly discouraged us from taking a ride, because of a history of accidents and falls. Nevertheless, one of our party did take a pony ride up without incident, although we did hear of someone who got thrown off that day, so it's not without its risks. Also, I think that the guides were worried that some people might take the pony up, but wouldn't be physically able to do the walk down.

So, we set off on this gruelling trek up the steep and rough paths through the forests towards the Tiger's Nest, the building not seeming to get any closer at all over the first hour. At all times, the views up and down were never less than breathtaking, although it has to be said that the exercise was extremely breathtaking in its own right. It was difficult to tell if we were so out of puff because of the hard physical effort, or because of the altitude (we were now over 3,000 metres).

As we progressed, I was pleased to discover that there weren't any sheer drops alongside us, so this isn't one to challenge vertigo sufferers; while, the weather was kind to us, so that it was warm enough to do most of it in a T-shirt, plus the sun wasn't too burningly bright. All the time I was struggling up there, it made you think of the people who'd carried all the building materials up there by hand – the construction of the monastery must have been real a labour of love (another sign of the deep religious convictions of the people). Having said that, our super-fit guides were clearly finding the ascent a lot easier than we were, bounding up effortlessly like mountain goats.

Finally, we got up to a lookout the same level as the monastery, staring across a gap in the mountain across at our tantalising destination, with long lines of fluttering prayer flags blowing in the cold mountain air between us. At this point, we came to the rather disappointing realisation that to get to the Tiger's Nest, we'd have to go DOWN a steep set of steps, and then back UP again – at this thigh-aching stage, it didn't exactly put a spring in our steps!

But, we puffed and panted our way along, past a plunging waterfall where the winter snow was still unmelted, and we inched ever closer to our goal. Once we finally got up to the monastery, it was just an amazing feeling to have got there - the sense of achievement was just about enough to put a spring back into the step of our weary legs, while, looking back down to where we'd started from, showed us just how far we've climbed.

To most people, the actual journey up to the monastery is more important than the monastery itself (and it certainly looks more stunningly photogenic from a distance than close up); but, actually, it is a very attractive set of buildings perched on that mountainside, made up of colourful temples and monks quarters. However, as we were being taken around, my thoughts kept on turning to the dreaded journey back down – the thought of descending down those treacherous paths with my now-weak legs wasn't filling me with joy.

Actually, it wasn't so bad at all – much, much easier than coming up, and surprisingly unslippery. The warm glow of achievement of having got up there in the first place was just enough to keep the energy levels going. It had been an absolutely amazing experience – the kind of thing that I'd never imagined that I'd actually get to do. A wonderful day!

Bhutan has left me amazed, bewildered, exhausted, and utterly enchanted.