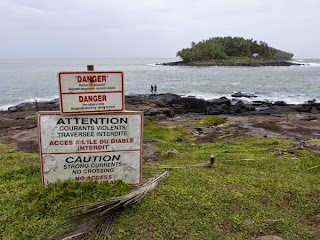 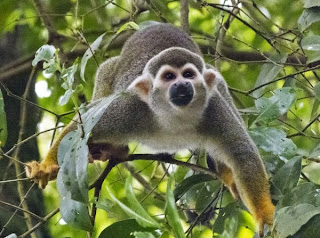 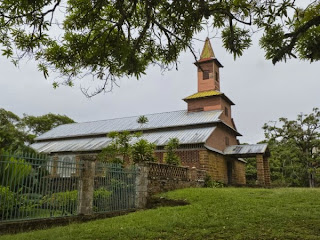 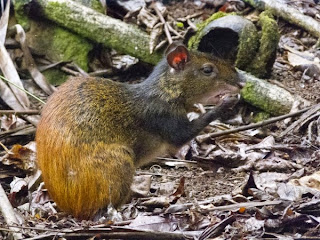 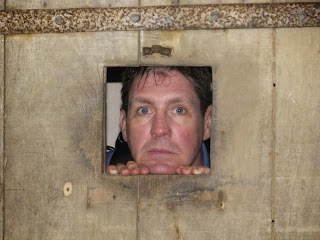 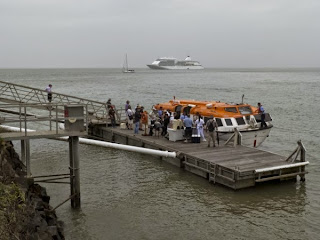 After 8 long days at sea, any dry land was going to look good to us, even if it was in the form of the forbidding Devil's Island, home to one of the most notorious penal colonies in history. Actually, as we arrived there in the morning, our chances of getting in didn't look too good – it was raining heavily, there was a big swell, and we could see the waves crashing against the rocks of the islands. However, the weather improved, and around the sheltered side of the island, the waves weren't too bad.

In fact, the breezy and cloudy conditions made this the most pleasant weather that I've ever had to explore Devil's Island – normally it's like a furnace here, and hotter than hell. Obviously, in a place where the oppressive weather and humidity contributed to two-thirds of the prisoners dying here before they'd even completed their sentence, it wasn't that pleasant, but it was at least bearable.

So, we walked around the rough paths that encircle the island, meeting lots of wildlife along the way – plenty of cheeky monkeys acrobatically leaping around in the trees, and strange looking, rat-like agoutis running around, picking up berries. It was strange to think that this fertile island of swaying palms, tropical seas and exotic wildlife was once one of the most-feared destinations in the world, when the French turned it into a penal colony for a hundred years from the 1850s.

But, it was once you got into the solitary confinement cells that you could begin to imagine the full horrors of incarceration on Devil's Island. With little light or air, the tiny concrete cells were horrifically hot – when the heavy door shut behind me, I could appreciate how many of the prisoners went mad or committed suicide.

The level of decay in the buildings that were being taken over by the jungle – collapsed walls, rotting doors, rusted through iron bars, was another sign of the toll that the extreme weather wreaked on the people and the infrastructure here. As you explored the ruins, it was hard to believe that the penal colony had only been abandoned by the French in the 1950s – they looked like they had been rotting away for hundreds of years, rather than 60.

It was strange to see that some of the buildings had now been turned into a hotel – who comes to Devil's Island for a holiday? It must be a fairly spooky place at night, given the depravities that the island witnessed; while it's also an expensive place to visit – with a small can of beer costing €5 and a T-shirt €25, then it's amazing what people will pay to be incarcerated here these days.

We visited the island's small museum which gave good background information on the regime here. We saw the case of one inmate who was incarcerated here for 20 years, whose original crime was setting fire to a mattress while on military duty – the punishment doesn't always fit the crime. And we read more about the infamous Dreyfus Case which so scandalised French society at the end of the 19th century. The army officer was convicted on trumped-up charges of treason, and sentenced to solitary confinement on Devil's Island. For four years, he was guarded round the clock by a team of 14 officers – apparently, every single time a ship was spotted on the horizon, a gun was held to his head, in case it was a rescue mission. It presented a picture of an unimaginably cruel regime.

Devil's Island is always a fascinating place to visit, but the things that always strikes me about it, is how a place that can appear quite heavenly, can have be turned into such a hell.