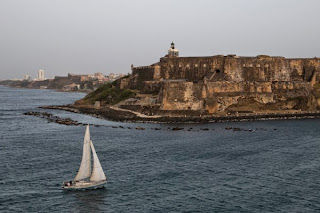 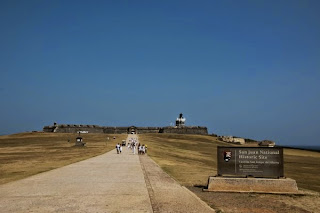 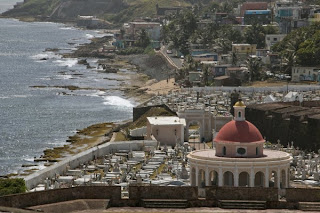 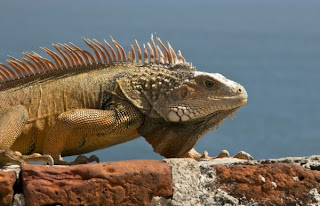 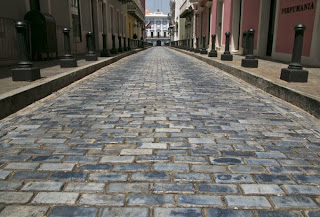 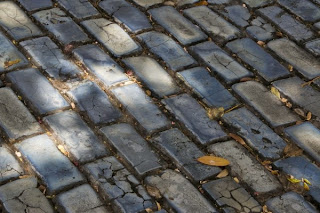 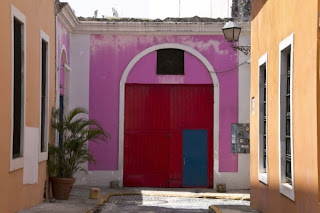 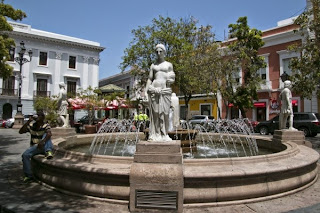 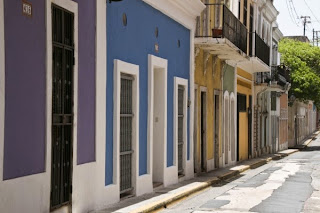 Puerto Rico sometimes gets a bad press – people who have been in San Juan when 4 monster cruise ships are in can find the crowds unbearable, while many people who haven't been here before don't realise that the Old Town is such a charming place of beautifully preserved Spanish colonial architecture.

Fortunately, we were the only ship in today, so we could get to savour the historic atmosphere in peace. The thing that strikes you first about the Old Town is how European it looks – architecturally, it bears many similarities with Cadiz in the Mother Country, while its layout of sturdy defensive walls and fortresses facing out to sea reminds me of Dubrovnik.

It was another steamy tropical day, but in amongst the grid of historic buildings, there was just enough shade for us to take shelter in, while there were plenty of bars and cafes to stop off for a cooling drink. Before it got too unbearably hot, we headed over to San Juan's number one historic site – the forbidding El Morro Fortress. This huge medieval fortress was begun in the 16th century, when possession of Puerto Rico was a cornerstone of a Spanish Empire that was growing incredibly rich on trade being shipped (via Puerto Rico) across the Atlantic from Mexico.

The approach to the fortress was by an attractive expanse of grass, which gave great views across to this huge medieval construction. Rather than being there to make it more photogenic, this open area was to give the Spanish a clear line of fire at their Dutch and English enemies (who attacked many times before the Americans finally took over the fortress in 1898). It was fascinating to explore the six different levels of the fortress, enjoying the views over land and sea, and getting to bump into the disconcertingly large pre-historic-looking iguanas that stood guard over the bastions as they nonchalantly sunned themselves.

By now, it was getting blisteringly hot, so we headed back into town to do some more exploring along its evocative blue cobblestone streets, before our final assault on another (even bigger) Spanish fortress – Fort San Cristobal – at the other end of town. This one was newer (it was only about 300 years old), so it didn't have as much history, however the sheer size of it was another reminder of the importance of San Juan to the Spanish.

After stopping for my first ever mofongo (a stodgy, plantain-based creole dish that's the national dish of Puerto Rico) in an air-conditioned restaurant (a pre-requisite by now), we braved the heat again, to head to a few of the town's factory outlet stores to check out the bargains – there were a few to be had.

Puerto Rico offers a nice combination of attractions – we didn't even go to the beach or the rainforest this time, but we still saw plenty of historical and cultural attractions on San Juan's atmospheric streets, plus we got to indulge ourselves with decent food and shopping options too. On a day without the crowds, San Juan was looking very good indeed. What a pleasant final port before the World Cruise ends.