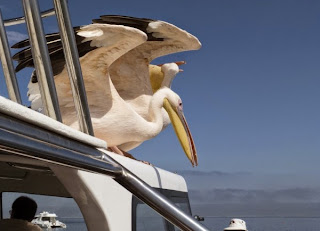 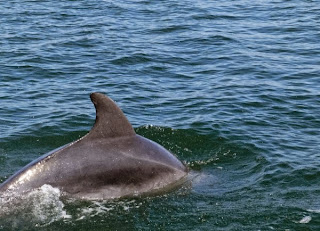 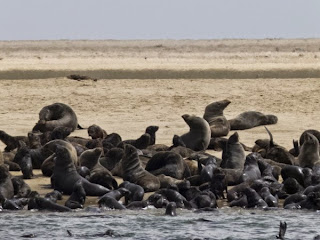 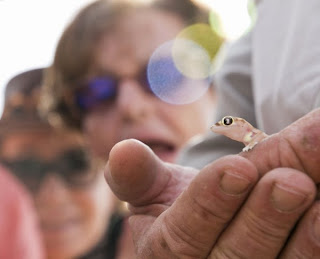 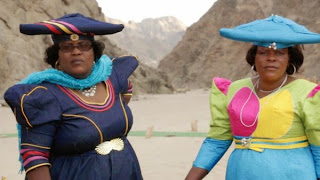 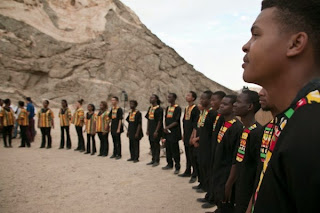 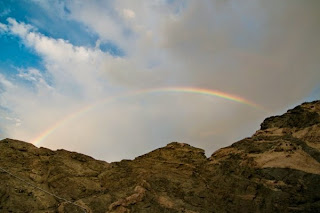 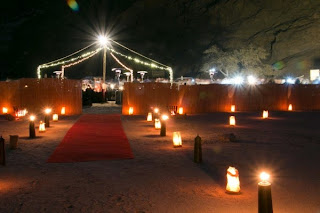 If yesterday was about exploring Namibia's history, today was all about discovering more of its fantastic nature. While Tracy was out exploring the wildlife of the desert, I joined the ship's tour taking a boat trip to Pelican Point, where we got up incredibly close to a wonderful array of bird and sea life.

Almost as soon as we set sail, enormous Pelicans were swooping down to the boat to eat the fish that was being offered to them by the crew members. These comical creatures look so ungainly on land; but in the air, they glided alongside us effortlessly until greedily stuffing a fish into their massive bills and choking it back. The more intelligent birds just sat on top to the roof of the boat and tried to grab the fish when the crew weren't looking – unfortunately, they appeared to have a problem distinguishing between fish and human heads, so anyone who walked past them got a bit of a pecking.

Our next visitors were a group of five African dolphins, who lazily bobbed around in front of our boat. They weren't putting on much of a show for us, so the captain put on some speed so that they'd have some wake to jump around in – they duly started leaping around acrobatically as they raced alongside us, better than any dolphinarium show.

If the dolphins were quite close, our next visitor from the sea decided to climb aboard, as a large seal lumbered onto the back of the boat to get some fishy handouts. It was an amazing (and slightly unnerving) experience to be just 2 feet away from a wild seal, and get to observe him so close up. He wasn't particularly smelly and he actually had quite good table manners, as he gulped down the fish, and let the crew show us his fur (it's totally dry under the top layer).

After he got off, we went to see a few of his colleagues at the seal colony that inhabits the tip of the peninsula. When I say "a few", there were 70,000 of the seals, that turned the sea into seal soup – as they barked, swam, and leapt playfully out of the water. I've never seen so many seals in one place – it was seal sensory overload.

To round off a marvellous trip, the crew served us up a platter of delicious oysters washed down sparkling wine – life doesn't get much better!

But, this was just the start of a wonderful day in Walvis Bay - that evening, we were joining the Silversea Experience to have a Dinner in the Desert. The location of the dinner was different to previous occasions – this time, we weren't surrounded by dunes, instead we were in an atmospheric gorge of an otherworldly, moonscape of rocks and canyons. It made for a quite magnificent location for what was a most enjoyable evening.

As the sun went down, a rainbow came out to greet us, and we were serenaded by a fantastic choir who put a real energy into their performance. It was an almost surreal combination of experiences – desert scenery, a world class choir, and great food and drink, you almost had to pinch yourself to make sure it was real. Perhaps the most amazing thing was wondering how they were able to serve up such a great spread, when we were right in the middle of the desert?

I'm running out of superlatives for this World Cruise – there's just been so many wonderful experiences.